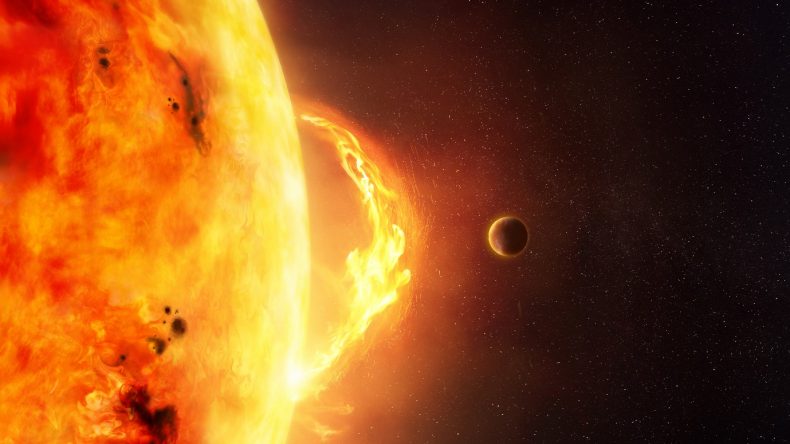 This might look like something straight out of a sci-fi movie about a catastrophe-stricken planet, but there is enough data to convert it from a fantastical rambling to a big scary fact. A new report published by researchers at the US Geological Survey claims that we can expect to be hit by a disastrous solar storm capable of eliminating almost all technology on Earth.

Solar storms sound cool, but what are they anyway? Formally known as Coronal Mass Injections (CMEs), they comprise of bursts of highly charged particles that are released by the Sun. Given their nature, it becomes immediately obvious that they can mess up any system that relies on electricity.

In fact, such “storms” have the capability to cause satellite failures, global blackouts, and even unstable volcanic activity. What this means is that a disturbingly huge part of the infrastructure that supports us will be brought down in an instant, be it a city’s electricity grid that won’t work anymore, or TV channels that won’t show up because the satellite transmissions have been eliminated.

The report considered the infamous New York Railroad Storm of 1921, which was a tremendous geomagnetic storm that sent various parts of the US plummeting into darkness, and concluded that we could expect a similar occurrence within the next 100 years. While this sounds like good news, it is worth considering what the researchers said next: the storm can occur any time, without warning, within this time period.
The researchers state that while the impact of this storm is going to be immense, the adverse consequences can be mitigated if we take lessons from the 1921 event.

“The timeline of the 1921 event, including the confusion caused by prosaic faults, can be used to construct scenarios for use today by those emergency managers planning how to reduce the adverse impacts of future space weather events,” they said.

So what are the chances of us experiencing a solar storm within our lifetimes? Well, history does tend to repeat itself, but let’s just hope that this is a grand exception.

previous
YouTube decides to revise their comment filters
random
next
Huawei is currently working on 6G, according to CEO
Trending Posts