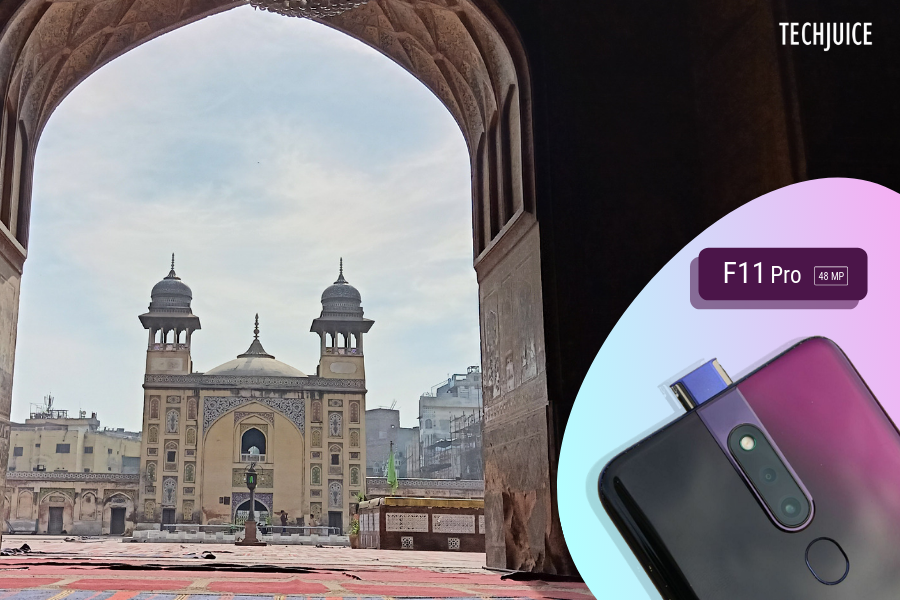 Last week, I had this sudden urge to have a full fledge ‘desi’ breakfast and for that, I decided to visit the walled city of Lahore. What a coincidence that OPPO F11 Pro arrived in the mail the same day. So, I asked a friend to accompany me and embarked on a journey to explore the inner heart of Lahore, where the grandiose architecture and art of Mughal Emperors lies intact for the past few centuries.

Before I begin, let me tell you that, OPPO F11 Pro is the selfie expert’s new midrange phone that gives a unique pop-up camera experience. The biggest hit of the OPPO F11 Pro is the fact that this smartphone comes in a decent price range with an elevating selfie camera. F11 Pro is also one of the best-designed smartphones available in Pakistan with a price of PKR 55,000/-.

F11 Pro boasts 6.5-inch display and thanks to the pop-up camera, the phone doesn’t have to surrender any screen to make room for a notch. The memory of the device comes in two different variations: 4GB of RAM and 64GB of internal storage or 6GB of RAM and 128GB of storage. The smartphone has a 4,000mAh battery that can be fast-charged using Oppo’s VOOC 3.0 technology.

With the OPPO F11 Pro, you get dual rear camera setup and a single pop-up selfie camera that comes out from its enclosure. In the case of dual rear camera setup, there is a 48-megapixel main camera paired with a 5-megapixel depth sensor to give a beautiful Bokeh effect that you will witness in pictures below. The 16-megapixel front shooter tends to smoothen your skin to such extent that you look much younger than your real age, thanks to the AI beatification mode.

We have extensively covered OPPO F11 Pro here, so after visiting the walled city don’t forget to learn more about the phone.

Masjid Wazir Khan, a 17th-century mosque commissioned by Mughal Emperor Shah Jahan is an art-piece reminding us the art, craft, and culture of Islam in the era of Shah Jahan. 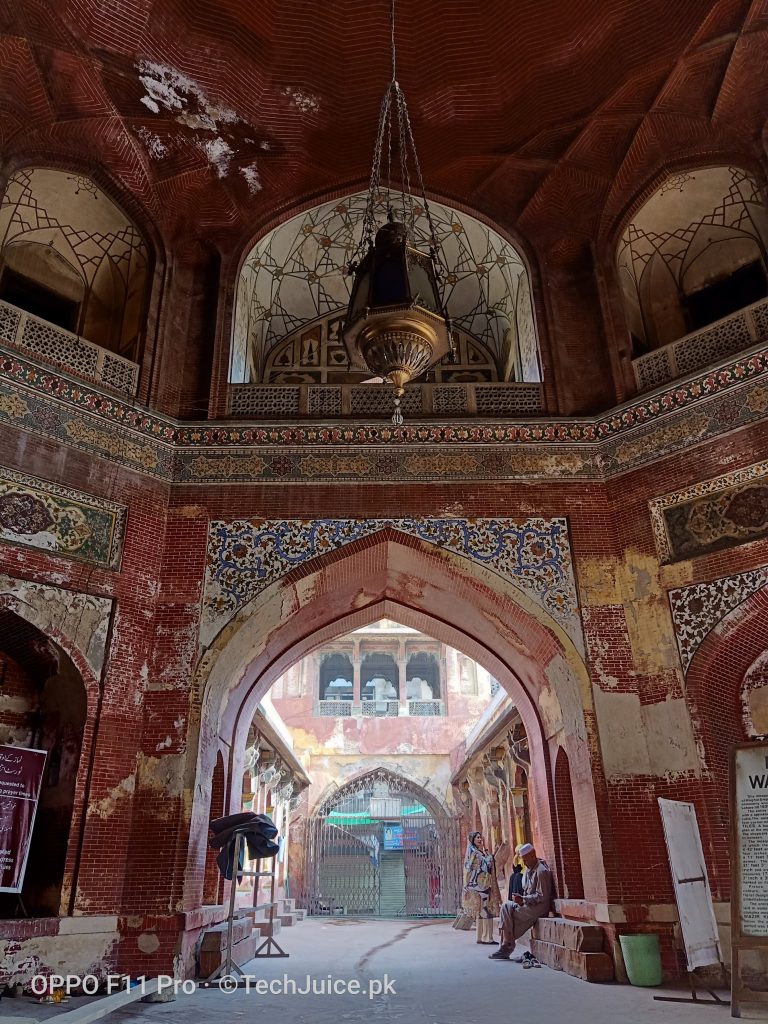 As we passed Delhi gate and were wandering cluelessly among those narrow streets of Walled City we came across this mighty structure which if you say was the perfect blend of modern engineering and art won’t be wrong. The entrance of the mosque leads to this passageway where you witness intricate faience tile work, pure craftsmanship of Mughal architecture and on the right this passageway leads to the mosque’s central courtyard. 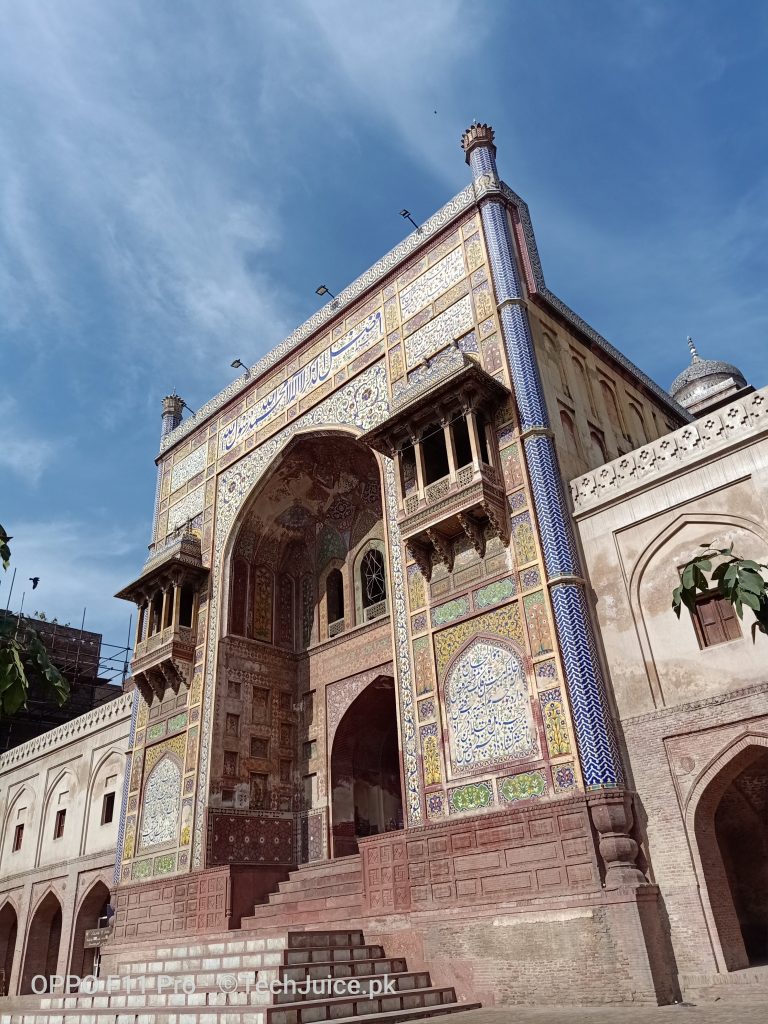 This is another entrance which leads to the octagonal chamber the passageway to all different areas to the mosque including the main entrance and courtyard. 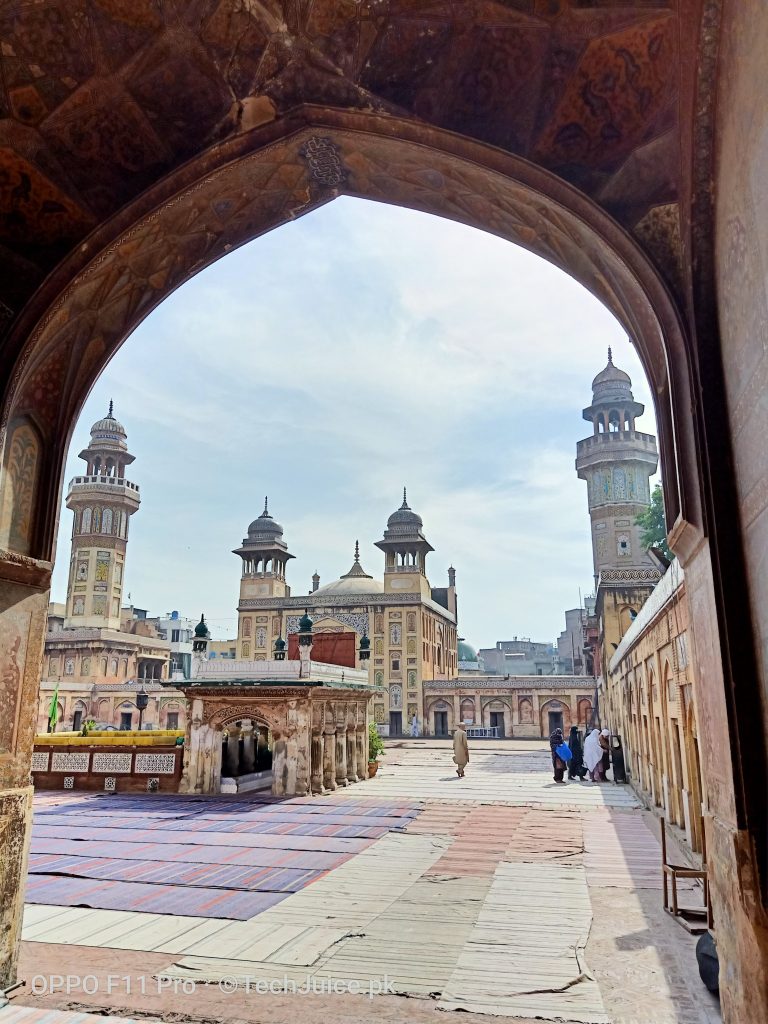 This shoot is from within the prayer hall which covers the most part of the mosque’s courtyard here you can see a tomb of Sufi saint Syed Muhammad Ishaq Gazruni in-front of us and behind it is the pool which is used for wudu. And on the right side of this shoot are the small study cloisters for religious scholars. 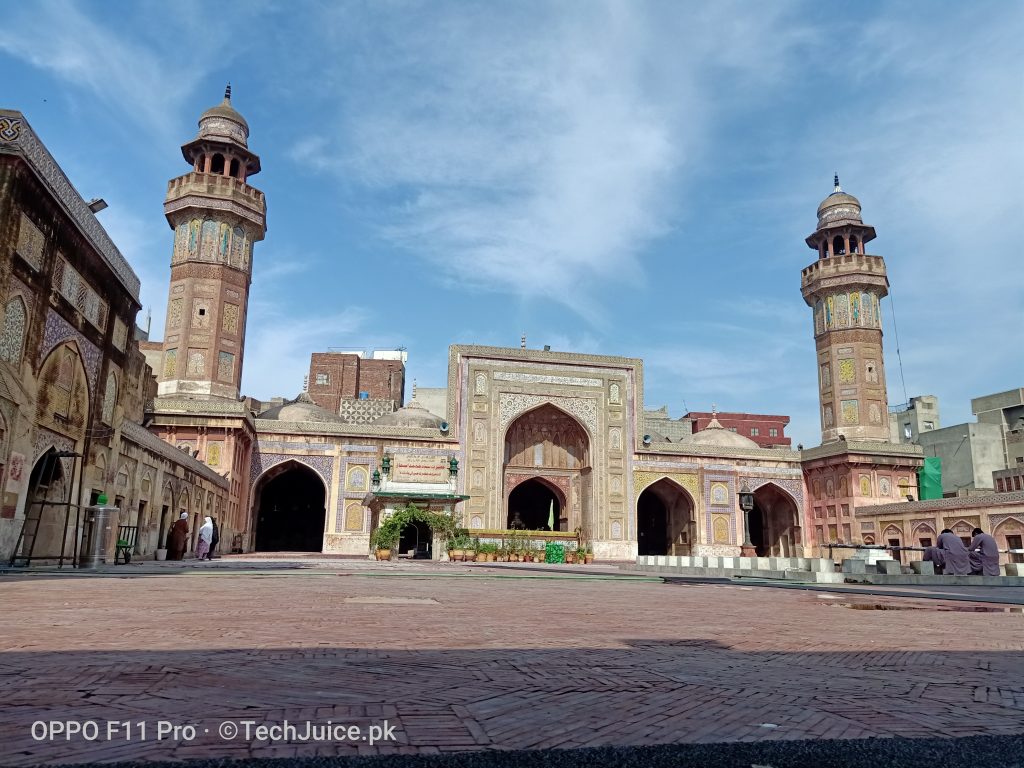 This shoot is taken from one corner of the mosque’s courtyard in this you can witness the prayer hall approximately 130 feet long and it’s divided into five different sections which are coordinated into a single long hallway running north to south. It’s right in front of the pool and tomb in the courtyard. 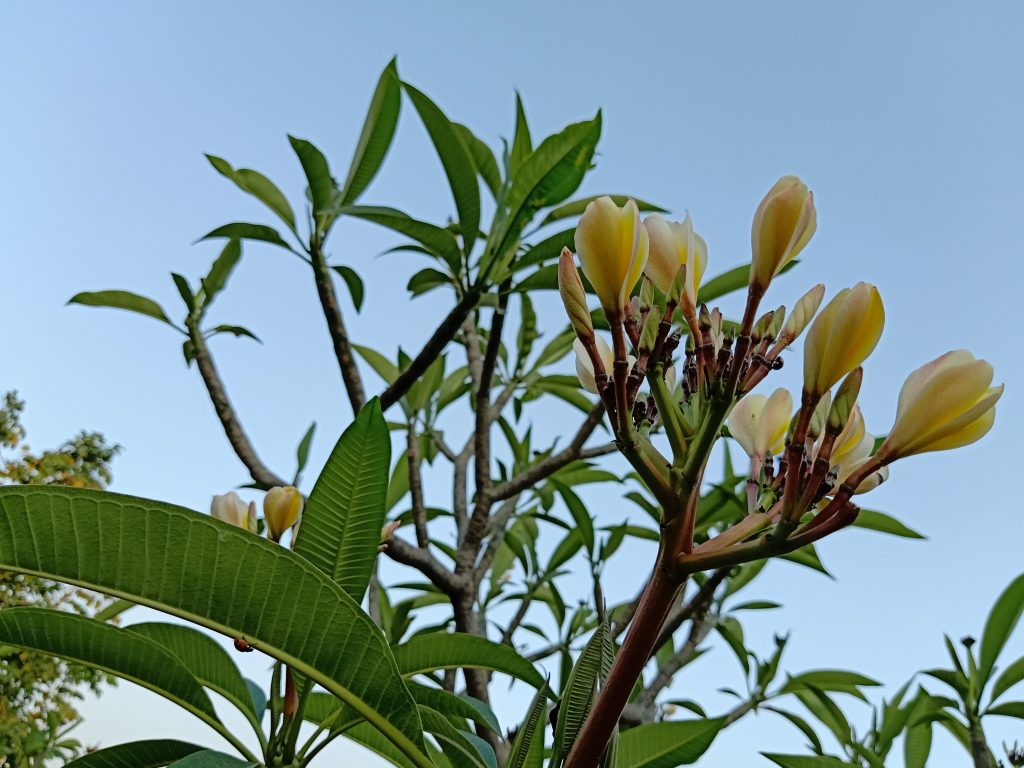 After trying out the landscape mode of OPPO F11 Pro, I was curious to check the portrait mode and Jia, my friend, was eager to get her hands on the phone. So she took this picture of a tree overloaded with seasonal flowers. You can see two things here. One crispiness of the flowers and two the background blur effect. I really liked the camera performance in portrait mode. 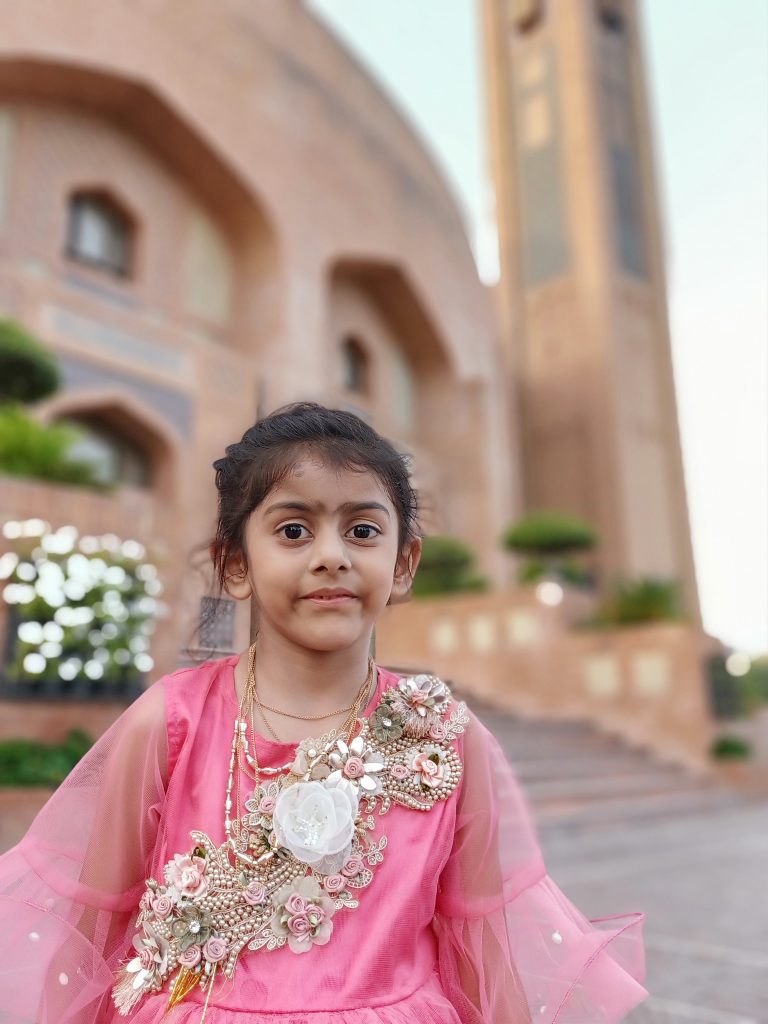 Here is another portrait of a girl taken by Jia, the bokeh effect is quite visible here. I liked how bokeh is formed in the background. It was the time just before the sunset and actually light was a bit low but how artificially OPPO F11 Pro lit up the picture, it looks actually very good.

This story is produced in collaboration with OPPO to test their OPPO F11 Pro smartphone available in the market for 54,999 PKR. 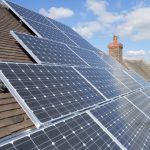