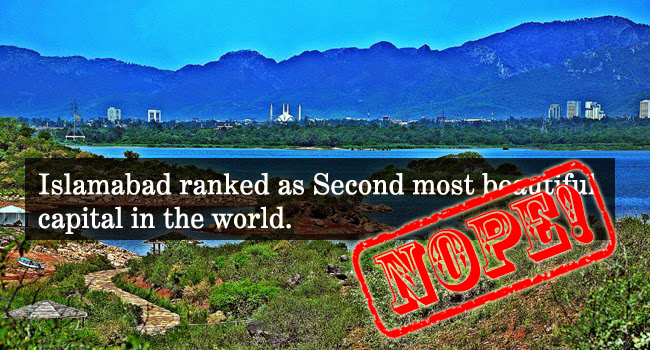 If you use any of the major social media platforms, chances are that you might have seen a picture, post, or link to some article claiming that Islamabad has been declared the second most beautiful capital in the world. Now, I love Islamabad, and I think the list is heavily misguided in a sense that Islamabad should be occupying the number one spot in the list, but that, unfortunately for me and my 185 million compatriots, doesn’t make the reality any different.

And the reality in this case is that Islamabad was never declared the second most beautiful capital in the world by any reputable or ever remotely competent authority.

How do I know that?

I do because I took great pains to visit the original source article (originally published all the way back in November 2013) which started all the frenzy, and that source is none other than TopTenFindings: a website which publishes public-submitted Top 10 lists, no matter what their content is. This means that if I were to write a Top 10 list entitled “Top 10 Most Polluted Capital Cities in the World”, rank Islamabad at No. 2, and send it to TopTenFindings for publication, it might soon appear at the website, no questions asked.

How do I know that?

I do because it says so on the “Submit Top 10 Lists” section of the site. If you dig a little deeper, you’ll also find, on the same site, Pakistan listed as No. 1 Dirtiest Country in the World. Does that mean it’s true? In the presence of countries like China and US, responsible for world’s 24% and 16% carbon dioxide emission count respectively, of course not, and that’s entirely the point.

Take another news making rounds in the social media, for instance: “Pakistani Men Ranked as Third Sexiest Nationality in the World”. Now your reaction to this might depend on your gender. If you’re a man, it might range from “Um, okay…” to “Took them long enough to figure that out! Let me share it right away!” On the other end of the spectrum, however, if you’re a woman, a sarcastic “Yeah, right…” would suffice.

But then again, how exactly was this matter blown out of proportions?

In this case, the online dating portal MissTravel did conduct a survey to collect opinions on “the Sexiest Nationalities”, but they were based on one sample male from different countries as an example. And the only contribution from Pakistan to that list was Zayn Malik, a 22-year-old born and bred in Bradford, United Kingdom, and whose remotest relation to Pakistan is that his father hails from this country.

But did the article-churning, social media sharing machines care? Nope.

Every single post that has been circulated ever since this story went viral has pictures of Pakistani celebrities like Hamza Ali Abbasi, Fawad Khan, Ali Zafar, and Imran Khan plastered all over the place. Were they even a part of this survey? Did any of the participating 66,309 American females ever see even so much as a photograph of these celebrities before they hit Zayn Malik’s name on that opinion poll questionnaire? Highly unlikely.

Do we care? Highly unlikely, that too.

But at least we can find some solace in the fact that we are not alone in this blind frenzy of likes and comments and shares. Some of you might recall how US citizens were caught in an #Ebola outbreak rumor-storm on Twitter earlier last year, or how a dad just trying to take a selfie at a mall in Melbourne, Australia was ridiculed online after he was mistakenly labelled as a “creep” by a mom on Facebook, or most recently, like how our neighbors flexed their keyboard muscle to force Mark Zuckerberg into deleting his post that depicted the very real, UN-sanctioned Indian map.

Unlike maps, however, beauty is a subjective matter. And as I said earlier, I have nothing against Islamabad (or the sexy Pakistani men, for that matter). The only thing that grinds my gears is that how quick we are to jump on the bandwagon in congregation and fire up our sharing machines when we see something soothingly ego-inflating, never taking a second to investigate whether the material in question came from a researcher, a blogger, or a random, anonymous person sitting behind a computer typing away at 140 WPM.

We here at TechJuice also explored the religious magnetism on social media in the recent past, and the situation on other fronts is not very dissimilar from the one we covered earlier if these fresh episodes are anything to go by.

Relevant must read: Exploitation of Religious Magnetism on Social Media

Finally, this discussion begs the question that can this mindset be pruned overnight? That’s quite difficult but the least we can do on a personal level is to develop a habit of cross-checking facts from reliable sources, and discourage the mindless sharing of hearsay stuff, one post at a time, one comment at a time.

TL;DR – Do not believe everything you read on the Internet. 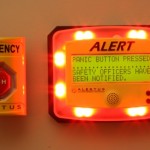