Just recently, an ex Twitter employee working in the USA on a H-1B visa announced that he was fired from the company right before thanksgiving. Not just this, but the employee in his Linked-in post mentioned that Elon Musk’s Twitter 2.0 team is firing a lot of employees with the H-1B visa and parental leaves.

Named Yiwei Zhuang, the H-1B visa employee was working in Twitter for over 3 years as a software engineer. Now with the Musk Twitter 2.0 team coming into office, he has to let go off his job “immediately, with no reason” he mentions in his Linked-in post. 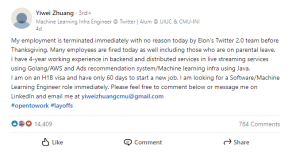 Before joining Twitter, Zhuang worked as a Facebook intern and is experienced in machine learning. Having been fired from Twitter, Zhuang now has only 60 days before he gets another job or he will have to leave America. Zhuang urged his Linked-in connections to get him another tech job since he doesn’t want to leave the country.

In his viral Linked in post with almost 500 reposts, Zhuang mentioned that “Many employees are fired today as well including those who are on parental leave”.

Currently Twitter has refused to comment on the matter, but reports suggest that Musk has fired over a dozen Twitter employees right before thanksgiving. All these recently fired employees were told that they were fired because of performance problems and were given one month’s salary for their troubles.

Almost none of these employees were expecting the firing to happen since Musk has already fired around 50% of the company before. A large number of people, out of the 50% employees that were fired previously, were also working in the company on a H-1B visa thus increasing concerns. 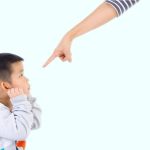