Facebook Messenger’s new update will now allow users to quote and reply to specific messages in a conversation, making it easier to keep track of important things and discussions (especially in larger group chats), as reported by VentureBeat.

The newly added feature is actually an expansion of the existing reaction emojis. In this new feature when you hold down on a message, you will be able to add a reaction, or tap on the “reply” option and add a reply to that specific message. The message that you reply will appear at the top of your sent message, so it will still show up at the bottom of the chat as usual. However, the message you’re replying to will be quoted in a slightly lighter texture, ensuring that members of the chat know what you’re talking about. We have tested the feature and it’s working fine for us. 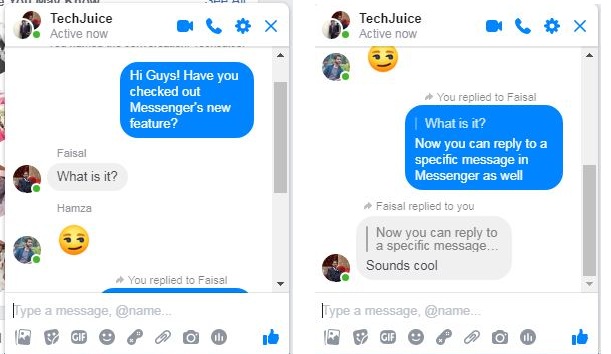 As for the mobile users, if you want to quote a specific message, long tap on it or just simply slide it right and you’ll see a new “Reply button” to the right of the reaction emojis. Tap on it, write your reply, and, just like in WhatsApp, the message you’re replying to, will appear above your reply. Isn’t quite easy? This feature is quite useful as well, in a way that it will help to communicate via messaging app more effectively and will also clarify misunderstanding during conversations.

The social networking giant has started rolling out the new messaging reply feature to Facebook Messenger from yesterday, and it’s coming to both iOS and Android. And even desktop users are enjoying the feature. If you can’t see the new feature yet, try updating your app to the latest version of Messenger.