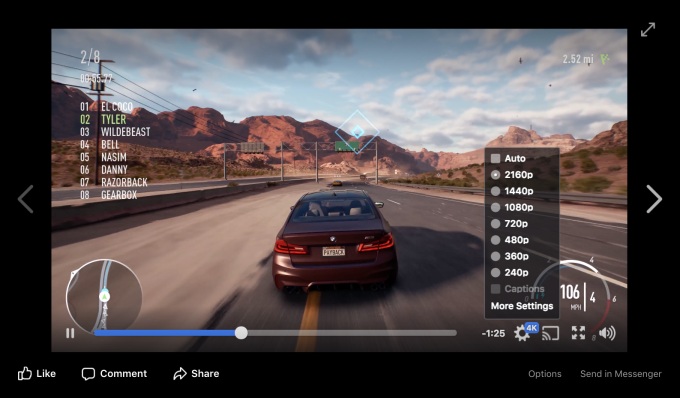 As many flagships and mid-range smartphones have enabled shooting 4K videos in their superior cameras, hence social media sites need to upgrade their apps to support 4k video play. After Youtube, now Facebook is also testing to upload 4K videos and viewing with the 2160p UHD-1 Ultra-High-Definition Television standard.

Youtube being the primary videos library already had this feature from 2014, and now it has also enabled to upload 8K videos which can be viewed in 7680p.

As reported by TechCrunch, some Facebook pages and profiles can now upload 4K videos to Facebook and can watch them in the same high resolution. This upgraded feature will also boost the productivity of Facebook’s Watch tab of original videos.

4K videos feature will be very helpful for those organizations and corporates who want to interact with their community by giving them high-quality videos with some extra pixels. Users will always have an option to choose between the quality of their own choice.

In order to test that you are watching the maximum resolution of any specific video, you can easily tap on the gear icon on the right menu to customize video according to your choice.

Facebook has been quite serious in updating its mobile applications. As it has now moved to a new domain of providing high-quality videos, so it must adopt comprehensive strategies in order to compete with Youtube and Netflix.