On Friday, the Government of Pakistan’s official Twitter account tweeted a quote that was offensive, incorrectly attributed and had grammatical flaws. 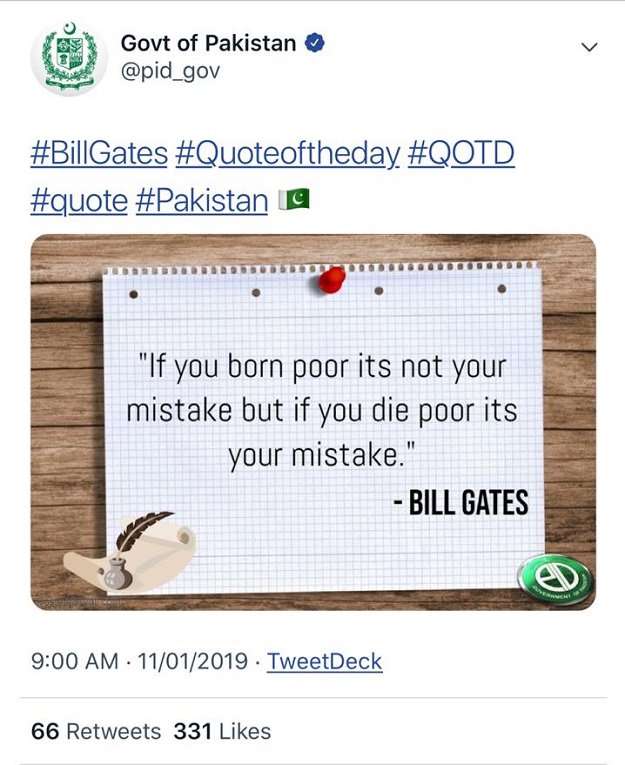 “If you born poor its not your mistake but if you die poor its your mistake.” This was the quote that was posted by the government’s official twitter. Clearly. the tweet is grammatically incorrect. In addition to that, it was attributed to Bill Gates, the principal founder of Microsoft. However, it is not clear whether or not Gates has actually said any such thing.

This tweet received criticism from the followers of the government’s Twitter account. They pointed out that the tweet was insensitive to the harsh realities of cyclical poverty, and that it also made the government appear ignorant when it came to taking responsibility for the well-being of citizens and providing them with decent living standards.

After getting harsh criticism, the tweet was deleted from the Twitter account. Official accounts or pages on social media platforms, including Twitter, represent Pakistan’s government on both national and international level. Hence, the tweets and posts made from such accounts should be aimed at maintaining a sensible and appropriate image of the government in everyone’s eyes.

Some Windows 7 PCs deactivated by a Windows update