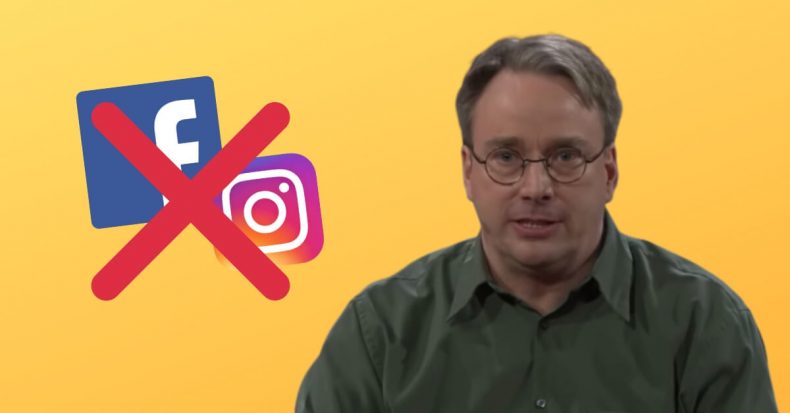 We have all had our moments of rage directed at the social media giants of this age, be it because of their terrible lack of concern for user privacy or the mere mind-numbing existence of a news feed that guarantees unproductivity. However, one person is definitely fuming at the state of social media apps, and that person is none other than the legendary creator of Linux and advocates for open-source, Linus Torvalds.

In a recent interview with Linux Journal’s Robert Young, Torvalds made no secret of his disgust at Facebook, Twitter, and Instagram. He insisted that they do nothing good for society, and if anything, he would gladly remove them from the Internet altogether.

As an individual who has spent a good deal of his life working on user engagement with operating systems and version control systems like Git, Torvalds finds the model used by Facebook and company to keep users engaged absolutely hideous.

“The whole ‘liking’ and ‘sharing’ model is just garbage. There is no effort and no quality control,” he said. “In fact, it’s all geared to the reverse of quality control, with lowest common denominator targets, and click-bait, and things designed to generate an emotional response, often one of moral outrage.”

Yet another aspect of social media that the Finnish-born innovator seems to have taken issue with is anonymity and its tendency to promote trolling, Internet wars and generally morally destructive behavior.

“Add in anonymity, and it’s just disgusting,” Torvalds said. “When you don’t even put your real name on your garbage (or the garbage you share or like), it really doesn’t help.”

While it can be easy to think highly of anonymity on the Internet because it promotes user privacy, the two concepts are actually vastly different, and this is something that Torvalds wishes more people would understand.

“Some people confuse privacy and anonymity and think they go hand in hand, and that protecting privacy means that you need to protect anonymity,” he explained. “I think that’s wrong. Anonymity is important if you’re a whistle-blower, but if you cannot prove your identity, your crazy rant on some social-media platform shouldn’t be visible, and you shouldn’t be able to share it or like it.”

As far as rants go, this one was not just informative but also pretty enlightening. If one of the most brilliant minds on this planet thinks social media is flawed, we could definitely do with changing our own habits.