Oppo announces A7 with a teardrop notch and Snapdragon 450 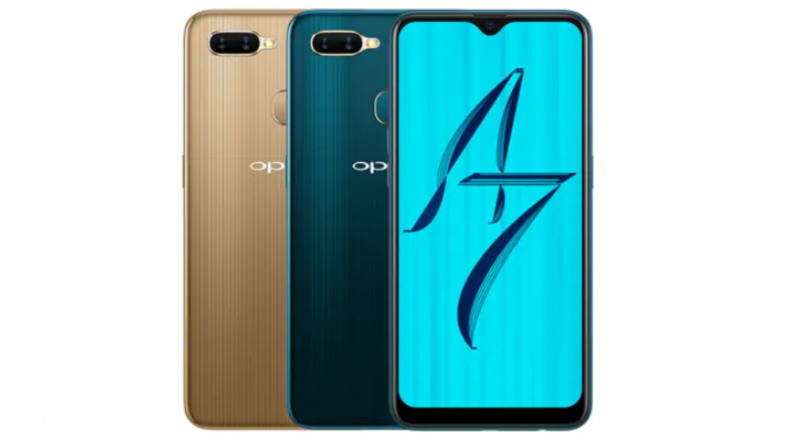 The water-drop notch design that was first introduced by Oppo R17 and then carried on by OnePlus 6T is now being featured in Oppo A7. Back in September, there were some leaks regarding this device but today the company has officially announced the Oppo A7 along with its specs. Much like the Realme 2, the Oppo A7 comes with Snapdragon 450 and is more or less a renamed version of Realme 2 with the exception of the tear-drop notch. Just for perspective, Realme is also a sub-brand of Oppo.

The Oppo A7 is yet another mid-range phone designed by the Chinese company for catering to the developing Asian market. The interesting thing about this headset is that Oppo has decided to ditch MediaTek Helio P60 chipset for Qualcomm’s Snapdragon 450 with the Adreno 506 GPU. The decision for changing the processor is a bit strange considering since P60 offered more CPU power compared to the lightweight Cortex-A53 cores of Snapdragon 450.

The Oppo A7 features a 6.2-inch FullView 2.5D curved glass display with 1520×720 pixels resolution and Corning Gorilla Glass 3 protection. The phone has 4GB of RAM and 64 GB of internal storage and can be increased up to 256 GB via a microSD card slot. The phone also packs an impressive 4,320 mAH battery. In the camera department, OPPO A7 has a dual camera set-up with a 13MP primary camera and a 2MP secondary camera for measuring the shallow depth of field, furthermore, it also features a 16MP front-facing camera. Like many other Chinese smartphones, the front-facing selfie comes with AI features such as AI Beautification 2.0, HDR and Bokeh mode. For unlocking, the phone has a rear fingerprint sensor and a face unlock feature. The phone runs on Android 8.1 Oreo-based ColorOS 5.2 which comes with Google lens integration and smart bar windows for multi-tasking. Furthermore, the phone also comes with micro USB connectivity, Bluetooth 4.2, and Hyper Boost technology for better performance in selected games.