Pakistan isn’t the best country in the world for education and skills development, new report states.

According to World Economic Forum’s Global Human Capital Report 2017, Pakistan is at the 125th spot out of 130 in a list that ranks countries on the basis of how well they perform in the education and skills development and infrastructure. All countries are graded on a scale of 0 to 100 in three sub indexes which include capacity, deployment, development, and know-how.

The report provides a detailed assessment of the human capital of 130 countries. Human capital is defined as the knowledge and skills people possess that enable them to create value in the global economic system. The report recognizes people’s knowledge, talents, creativity, and skills and argues on the importance of building deep and diverse talent pools that would, in turn, contribute to a country’s economy. But clearly, Pakistan is not nurturing or strengthening its human capital. 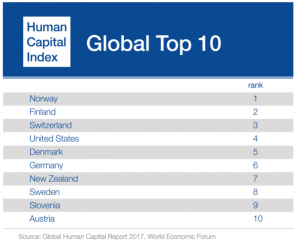 The report states that the human capital potential in Pakistan is held back by low rates of enrollment and poor-quality primary schools. However, the education performance on the tertiary level is relatively better even though skill diversity among our university graduates is low as compared to other countries. The report also indicates that there is a gender gap that needs to be addressed so that more human capital is employed.

Among other South Asian countries, Sri Lanka was the only one in the top 100 with a 70th rank. Sri Lanka benefits from its high enrollment rates in schools and better quality of education. Nepal ranks at 98, India at 103, and Bangladesh at 111. Apart from Sri Lanka, all these South Asian countries including Pakistan, have yet to reach the 60% threshold of human capital development.

The list was led by Norway, which ranks as the best-performing country in the world when it comes to the training and education of its population. Other countries in the top 10 include Finland, Switzerland, the United States, Denmark, and Germany.

Update: An earlier version of the story did not give due image credits. The cover photo was shot by Abdul Baqi. 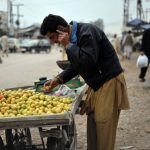