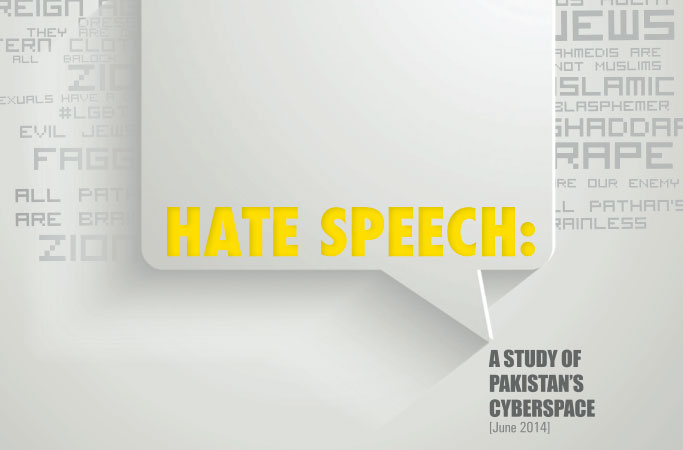 The online hate speech report survey in Pakistan has found that 92% of respondents have come across such content online, and 51% have been the target of it. Despite this, most were largely unaware of hate speech laws in Pakistan.

The survey, the first of its kind in the country, was commissioned by Bytes for All (B4A), a Pakistan human rights organization, in an attempt to quantify the growing instances of online abuse taking place in the country’s cyber sphere.

The report, penned by journalist Jahanzaib Haque, editor of Dawn.com, highlights the growing problem in context of booming internet penetration in the country, with an estimated 20 million users and 3G and 4G launches occurring in 2014.

The data for this survey was gathered from 559 internet users and included analysis of 30 Facebook pages and 30 Twitter accounts.

“At the same time, this groundswell of online activity has seen the emergence of a dangerous trend — that of unchecked hate speech, sometimes in the form of organized campaigns.” The report here points to the social media reaction to the killing of Punjab Governor Salmaan Taseer after he defended a Christian woman accused of blasphemy. Facebook pages appeared celebrating his murder. 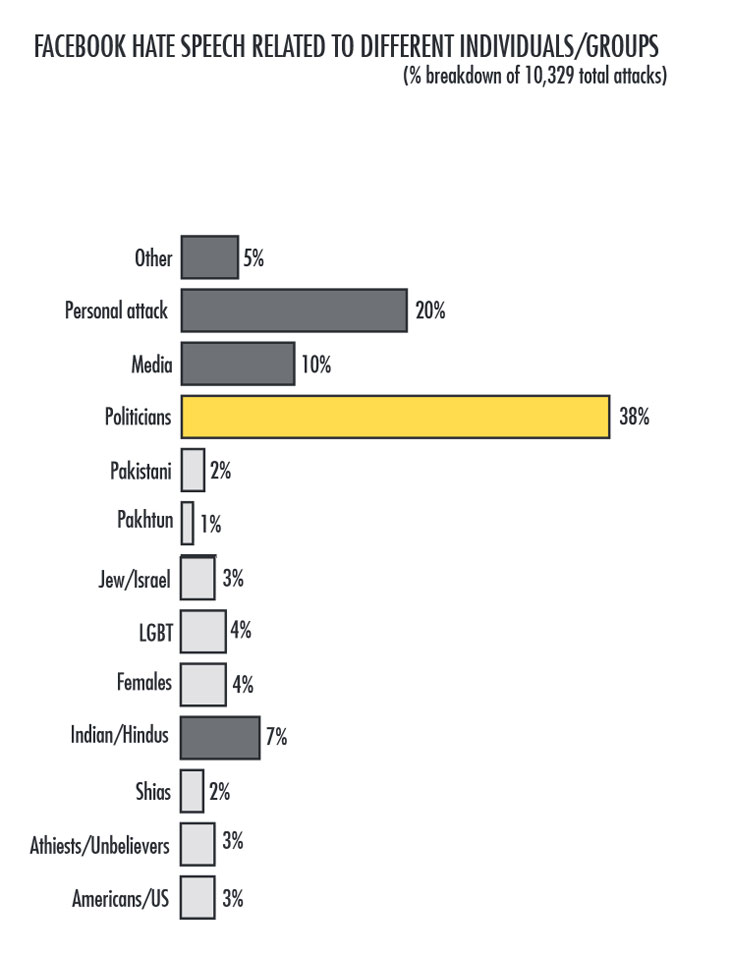 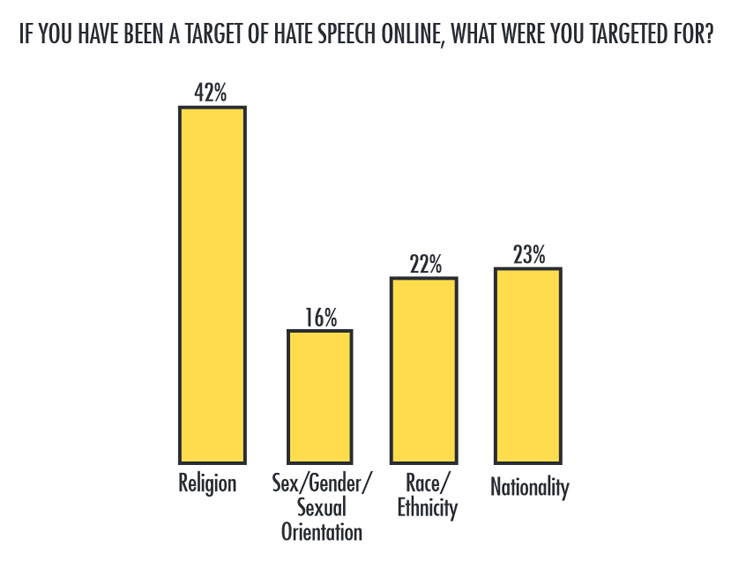 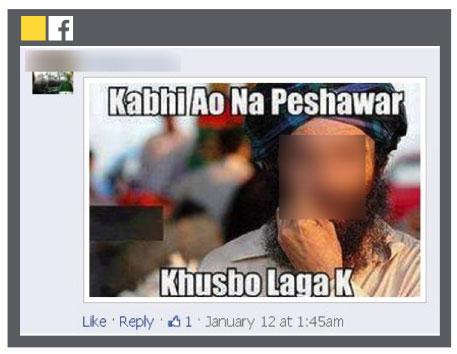 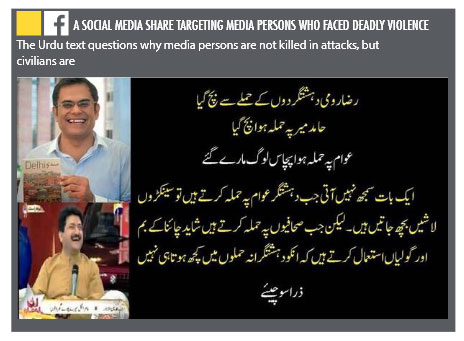 For this reason the report suggests: “The media in particular would need to look at its role in the spread of online hate speech, as many high impact, high reach areas of local cyberspace are operated/administered by them. The administrators of social media accounts, particularly Facebook, where hate speech is spread need to be engaged and educated to follow codes of conduct and best practice with regard to online community engagement and set up word-block lists for common hate speech terms in English and Roman Urdu where possible.“

The report does call for closer ties with social networks and other internet giants, so that they can “be educated on problems specific to Pakistan”. Facebook already does this to a certain degree. It will allow for tailored reporting tools, so in Pakistan, it might have an option that says the user wants to report an item for insulting a politician. This all relies on public reporting and self-regulation though — Facebook will not actively seek out this material, but wait for complaints and deal with them as and when. If you’ve ever seen a popular political message or photo go viral on Facebook, you’ll also be familiar with the criticism that tends to follow. A woman holding up a sign that could vaguely be considered to be feminist will have posted in the comments hundreds of vitriolic sexist, misogynistic and even violent messages. They are bold and clear, but Facebook does not take them down unless they are drawn to its attention.

Politicians (38%) and the media (10%) were identified as the biggest targets by the report when looking at an overview of hate speech on Facebook. 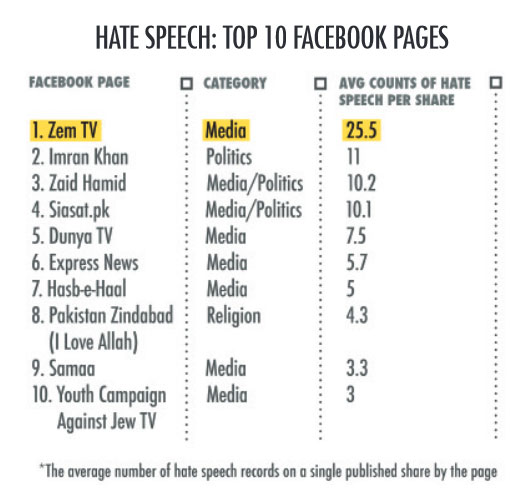 Twitter also reflected these numbers. “This high level of hate speech is especially worrying given the context of the ongoing war against terrorism and the real-life threats to life of both politicians and those working in the media face,” reads a release attached to the report, suggesting if the hate speech continues uncontested, it could contribute further to the country’s vulnerabilities identified here.

Looking at the backgrounds of respondents, a distinct correlation occurred showing that those from high income backgrounds had a better grasp of what hate speech is, than those from low income. As such it’s also suggested education play a key role in changing things.

“The need for such a study was paramount, given the real world impact online hate speech is having in Pakistan, whether that be the well-organized anti-Malala campaign online, how social media fueled sectarian divides during the Rawalpindi riots, the arrest of a professor on grounds of alleged blasphemy for posts run on Facebook, and even the most recent online campaign of hate against media persons,” commented the writer behind the report, Haque. “Clearly the issue needs to be addressed, but without regressive action such as state-led censorship and bans.”

In an interview with Global Voices, Bytes For All’s director Shahzad Ahmad admitted there is an element of the online world reflecting the offline, thus some radical changes would need to be made to see things improve. However, he suggests: “While conventional peace building methods such as dissemination of online social etiquette are extremely important, Pakistani cyberspace is in dire need of pro-people cyber legislation to address the need of the day — holistic accountability of all individuals.
“Pakistan has had cyber laws in the past, when the ordinance lapsed, no one bothered to make sure that it remained a continuing process. Sadly, the past laws were anti-people and largely flawed, and the current proposed draft is also fairly problematic, although it can be improve after a multi-stakeholder process, which the government is always wary of.”

Pakistan’s proposed Cyber Crimes Act, 2014 has in the past been criticized for having vague definitions of crimes and serious punishments for minor offenses. In an article published in February shortly after the draft was revealed, the founder and director of the Digital Rights Foundation Nighat Dad, warned that the wording used could provide the authorities with the power to intercept electronic communications without a warrant. She also points out that parts were copied from the Information Technology Act 2000 in India, an act that received widespread criticism and ultimately had to be amended in 2008.

Ahmad called for urgent action, saying: “We, at Bytes for All, hold Freedom of Expression very dear as an inviolable fundamental human right, but often see it being fettered in false paradigms of morality, security, national interest or even hate speech.”

“For the reason that speech is regularly gagged in Pakistan under these guises, and the fact that hate speech is the only real threat to Freedom of Expression, we felt it important to study online hate speech in Pakistan, to define it using the best standards, and obtain some idea of its incidence in the country. This is important to ensure hate speech becomes clearly defined, and not confused with national security, religious sentiment, morality or decency.”

The panelists urged Senator Ghani to look into the matter on an urgent basis and impress his fellow lawmakers to remove the loopholes from the draft bill especially as the bill once passed would have significant implications. Under current laws, according to the report, less than 1% of the hate speech found would be termed a punishable criminal offense.

What are your thoughts and views about the report’s findings? Where should the lines between Freedom of Speech, humor and hate speech be drawn? What steps do you think should be taken to cut down the total online hate and cyber-bullying? Have you even been a victim of online hate, if so, how did you deal with it? Share your valuable opinions with us in the comments section below!

For further details you can access the original report in PDF format here. 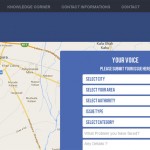