The recent tech events and co-working spaces in Peshawar have built up a strong ecosystem for startups and entrepreneurs to flourish in their community. The Code for Pakistan, Peshawar 2.0, Base Camp Peshawar, Empower Pakistan and many more have been working hard to bring the same opportunities and facilities in Peshawar as other large cities in Pakistan.

We witnessed a lot of hidden talent that came out as a result of these events. Messiah, 1-click emergency app and winners of Code for Pakistan Civic Hackathon, went on to win Oasis500 Bootcamp and got selected for National Mobile App Competition. Moreover, these events have gained international attraction like Cisco will establish training centres in educational institutions in KPK.

Basecamp and Peshawar 2.0 are making extraordinary efforts to build up a startup community in Peshawar. As part of these efforts, Peshawar 2.0 along with KPK IT Board and World Bank has launched the second edition of Digital Youth Summit (DYS) 2015. The event is scheduled to be held at Peshawar from 7th to 9th May 2015 to bring together the next generation of innovators, social entrepreneurs, freelancers, startup community leaders and investors on one platform.

TechJuice reached out to Muhammad Uzair, co-founder of Peshawar 2.0, to discuss the details of DYS 2015. While talking about the event, Uzair said,

“This year DYS will go global with about 10-12 international speakers invited from different startup ecosystems around the world.”

He added that the main purpose is to learn from international ecosystems and implement them after making adjustments to the needs of Peshawar.

Uzair pointed out that they aim to promote a hardware maker community, Internet of Things, Big Data and Bit Coin technologies in Peshawar. Out of curiosity, I asked Uzair about the response of girls regarding the tech events; he said,

“ There is more turn out of girls in Peshawar tech events than it is in Silicon Valley. We always try to come up with events which might be more interesting for girls such as biotechnology, bioinformatics events etc.”

When I asked Uzair whether it is difficult to conduct an event in Peshawar with the recent security and terrorism issues, he provided me with an optimistic response. He explained that they haven’t faced any major problems but sometimes authentication procedures become lengthy and often work gets delayed.

Uzair provided us with an exclusive list of speakers both from Pakistan and abroad along with the discussion topics. He mentioned an important speaker of the event which is the Emergence Director of NUMA (Silicon Valley of France) – Nathanael Sorin-Richez. You can check out the full list of Speakers & Judges at the end of the article.

The World Bank representatives will moderate most of the panel discussions which are both exciting and worth attending. You can judge the level of the event with the discussion topics included which are both intuitive and useful for budding entrepreneurs.

If you want a chance to take advice or pitch your idea to entrepreneurs from different backgrounds, then head over to Digital Youth Summit, 2015 website and get registered for this amazing event. 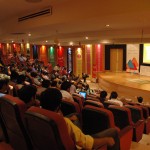