DisplayMate Technologies has released the results of its comprehensive and independent evaluation of the Samsung Galaxy S8 Display, concluding that Samsung’s new flagship possesses “the best-performing smartphone display that we have ever tested.”

DisplayMate is an industry standard for optimizing, calibrating, testing, evaluating and comparing all types of displays, monitors, projectors, mobile displays, HDTVs, and all display technologies, such as LCD, OLED, 3D, LED, LCoS, Plasma, DLP and CRT. DisplayMate is used by every major manufacturer in their research labs, by hundreds of test labs and service facilities, by thousands of technicians, and by over 100,000 consumers and end users.

The comprehensive report provides a point-by-point analysis of the device’s high-performance hardware, as well as the advanced features and functions that allow its display to offer a peerless visual experience. The displays on Samsung Galaxy S8 and S8 Plus have the latest dual-edge curved screen Flexible OLED Displays that set a number of new display performance records. The report states,

“The Galaxy S8 is the first in a new generation of OLED Smartphones that have a Full-Screen Display design. It has many major and important state-of-the-art display performance enhancements, features and functions, with mobile OLED display technology now advancing faster than ever. The Galaxy S8 is the most innovative and high-performance Smartphone display that we have ever lab tested. So the Galaxy S8 becomes the Best Performing Smartphone Display, earning DisplayMate’s highest ever A+ grade.”

You can read the whole report here.

Samsung S8 and S8+ will start rolling out to consumers from 21st of April. Galaxy S8 has a starting price of $720 (about PKR 75,000), while Galaxy S8+ will retail for about $840 (about PKR 88,000). Remember these prices are not for Pakistani market, so expect some variation when these phones are officially released in Pakistan. 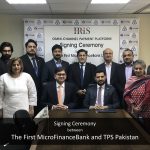