The scientists of Scotland have developed a new camera, which has a distinguishing feature of being able to see through human body. Yes! You read that right – a camera which can see through your body. It is quite similar to Superman’s superhuman vision ability, which allows him to see through objects. However, this camera has been made for medical purposes and can only see through human body. It will have an immense usage in the medical field, helping doctors in tracking the medical tools such as in endoscopy. Depending on the internal conditions the medical officers will be able to detect the track of medical tools in the body using this camera.

This camera’s ability to see through the human body is because it is able to detect the light emitted by the medical tool. For example, in case of an endoscope, the camera detects its track from the light source at the tip of endoscope tube. 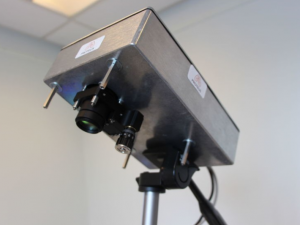 The preliminary tests show that the camera can detect the endoscope through the 20cm (8 inch) of tissue. This camera is surely an inexpensive alternate of the X-ray or other expensive equipment. Tracking of equipments is not easy and using conventional methods is of no help. The camera is so sensitive that it readily detects the light emitted from equipments even before the light gets scattered. The size of the camera is so small that it can be easily adjusted on the patient’s bedside.

According to Prof. Kev Daliwal from the Edinburgh University, “The ability to see a device’s location is crucial for many applications in healthcare, as we move forwards with minimally invasive approaches to treating disease”.

Moreover, Dr. Michael Tanner, of Heriot-Watt University, said, “I hope we can continue this interdisciplinary approach to make a real difference in healthcare technology”.

This project was basically a joint effort by the University of Edinburgh and Heriot-Watt University. The project is part of the Proteus Interdisciplinary Research Collaboration which aims to develop new technologies for the medical field particularly in diagnosing and treating the lung disease.