Here is your first look at the complete SpaceX Spacesuit 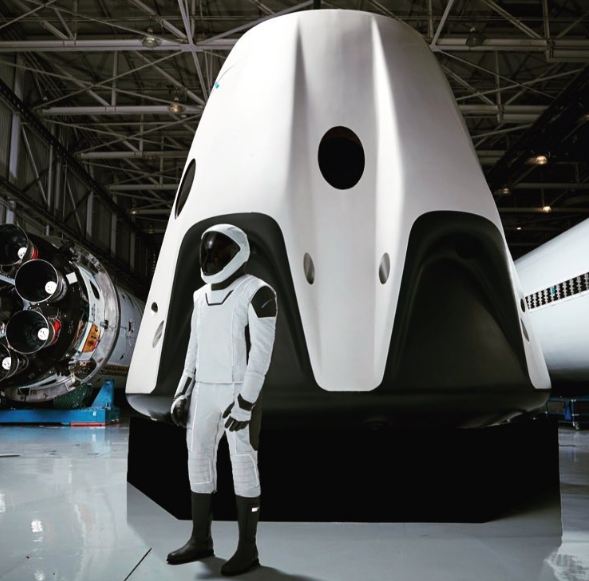 Elon Musk is a man of ideas and wonders. Every single day he is either unveiling some tech product or is announcing his future ventures. This time he is back to unveil the first ever full-body picture of SpaceX’s space suit which the company has designed itself. The news comes a few weeks after he revealed a picture of the same spacesuit including the helmet and the shirt.

Astronaut spacesuit next to Crew Dragon

Musk posted the picture on his Instagram account and since then it is creating a buzz in tech and scientific circles. The picture show a person wearing the suit and is standing right next to the Crew Dragon capsule — a space vehicle which the company is making to send astronauts to International space station. A while back, SpaceX and Boeing joined hands with NASA in a cost-saving partnership to provide a facilitation and less expensive travel to the ISS for their Commercial Crew Program.

Spacesuit looks cool and sleek. The first full-body picture reveals the gloves, pant and boots design for the very first time. The boot looks lightweight — meaning it will assist astronauts during mobility. Moreover, at a closer look, there are black padded areas at the back of space suit’s shirt and pant, which might be designed to give comfort to astronauts while they sit in the capsule.

The suit looks more like a protective suit of professional bikers instead of a space suit. However, it will not be used for spacewalks but will be worn by astronauts while they are in the capsule. Furthermore, it will protect astronauts in case of loss of cabin pressure in-flight. The space suit is not a mockup instead it has been tested in double vacuum pressure and is in working condition.

Musk said that he will release more information regarding the space suit soon.

previous
Facebook will spend $1 billion on bringing original TV shows to its platform
random
next
iOS 11 is coming: Everything you need to know & how to download it!
Trending Posts