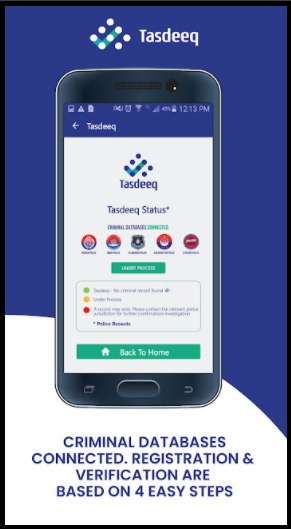 The Tasdeeq Pakistan app’s database comprises domestic, industrial, and corporate workers and thousands of blue-collar employees from different organizations whose data can be verified before a new appointment reports DAWN News. The project stems from a collaboration between the Sindh police and the Citizens-Police Liasion Committee (CPLC). “This verification process would help households and companies identify criminals, as well as keep themselves safe from crimes by providing police with this data,” said a CPLC official. “Services like Tasdeeq Pakistan would play a great role in reducing crimes perpetrated by domestic and industrial workers if the police promptly receive the information through their registration,” added DIG-South Javed Akbar Riaz.

The technology enables verification of an entire workforce, which could number in thousands within seconds. “Using this platform, households and companies can verify their entire workforce at the click of a button.”, said Ahmedyar Janjua, co-founder of the Safe Pakistan Welfare Trust (SPWT).

The service was initially meant for the common households but has now been extended to the corporate sector and met with remarkable success.

The country’s biggest food delivery company registered more than 6,000 individuals and identified over 50 people with previous criminal records. “Over 6,500 businesses across the country are using this facility, including 65,000 plus households that have registered their workers using this service. Tasdeeq has penetrated almost every sector in the entire country,” according to DIG South, Javed Akbar.

The police authorities are confident that apart from the registration and database building of workers, the project would also help them keep petty crimes under control to a large extent. However, the app raises privacy concerns since its verification involves taking pictures of the person being verified and uploading his/her personal information, which then becomes part of its database.

Pakistani institutions already lack strong data protection protocols, have failed to protect citizens’ data in the past and the collection of personal data of less-educated individuals who may or may not consent to it, on a mass scale, could result in privacy invasion on a large scale.

Multiple data scandals involving NADRA – the largest database of Pakistani citizens’ biometric information, including one in which over 100 million Pakistani’s data was breached, have been reported in the past. NADRA has also been accused in several instances of giving access to its sensitive data to unauthorized third parties.

An in-depth analysis is needed to assess the data collection method adopted by the app, the security of the database in which it’s stored, who has access to it, and whether the individuals whose information is being collected have given their express consent for it. 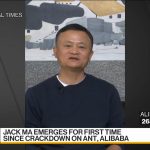