The company that signed contract to build IT Park in Pakistan, blacklisted in South Korea

South Korea has blacklisted the S. Korean based construction firm which was contracted to develop the Information Technology Park in Islamabad. The previous government of Pakistan under the supervision of Nawaz Sharif gave SUNJIN Engineering and Architecture Company Limited the contract to build IT Park in Islamabad.

Pakistan’s IT ministry was hoping that the construction work on the Technology Park Islamabad would begin in April, but the construction process has been slowed due to the blacklisting case on the firm in South Korea.

But, the authorities in Pakistan IT ministry are still willing to work with SUNJIN construction firm, as reported by Tribune. This raises serious questions in regards to why the PTI-led government despite their strong front against corruption would want to work with a company involved in corrupt activities.

Khalid Maqbool Siddiqui, the Federal IT Minister of Pakistan stated, “This contract was awarded before our government came to power. The Economic Affairs Division (EAD), under the previous government, reached an agreement after conducting a complete inquiry on the matter”.

Khalid Maqbool also said that the members of the Export-Import Bank of South Korea (Korea Eximbank), KFTC which are based on the bank’s Economic Development Cooperation Framework, expressed no objections about the company during the meeting with EAD officials regarding the issue.

He also explained that the Korea Eximbank under the agreement is supposed to lend 10 billion rupees to Pakistan for the construction of IT Park in Islamabad. Furthermore, he said, “EAD and Korea Eximbank are the two important characters in this agreement and must have reviewed all aspects”. 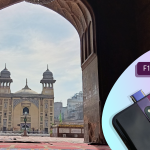