TechJuice > Education > This country has the highest number of Ph.D. graduates

This country has the highest number of Ph.D. graduates

Organization for Economic Cooperation & Development (OECD) published a report that indicates the number of doctoral graduates in its 35 member states.The report observes, more scholars than ever are completing their doctoral degrees, indicating a major increase in doctoral graduates for the past two decades. The report also indicates that platforms to internationalize research and increased digitalization is helping the cause of shared global knowledge economy.

With no country near the number of 67,449 Ph.D. graduates produced by the USA in 2014, Germany and United Kingdom follow at the second and third place with 28,147 and 25,030 doctoral graduates respectively. The report indicates that emerging economies have been observed to have the right training capacity to expand higher education in their respective countries. Case in point is India, ranked 4th with 24,300 doctoral graduates. To name a few, it has left behind major developing countries such as Japan, France, Canada.

While Japan ranks 5th on the list, it only has a quarter of the doctoral graduates that the USA produces. The number of Ph.D. graduates in Japan amount to 16,039. France and South Korea rank sixth and seventh respectively with 13,729 and 12,931 doctoral graduates respectively. Spain and Italy almost have similar numbers of 10,889 and 10,678 respectively putting them on eighth and ninth positions. Australia beats Canada to be at the tenth position with 8,400 graduates. 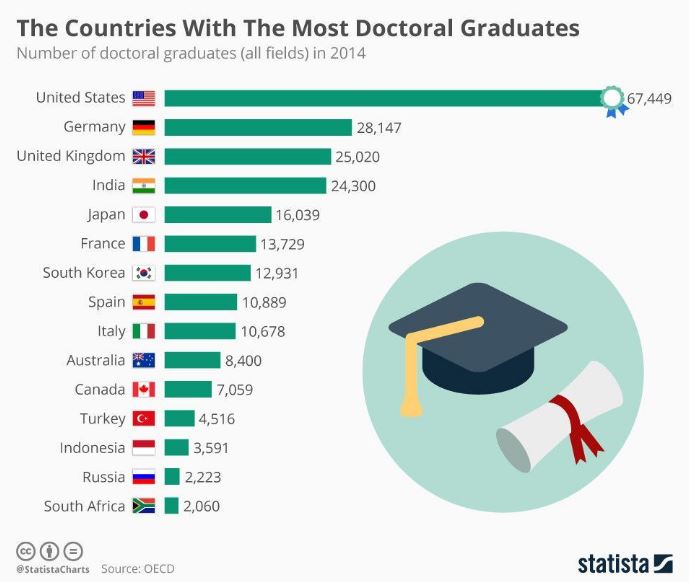 However, it should be noted here that if the population of the above countries is taken into account to plot the number of doctoral graduates against the per head population then the above ranking appears to be very different. 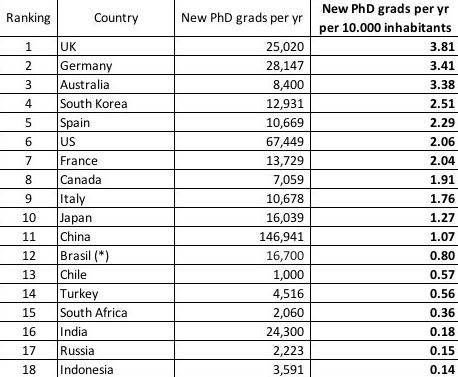 It was also observed that 40% of the new doctoral graduates in the OECD states pursued research in the field of science, technology, engineering and mathematics (STEM). If research on health is also added to this number then it increases to 50%. For France and Canada, the doctoral programmes were found to be oriented towards engineering and natural sciences as compared to fellow OECD member states.