What’s the future of NetSol? 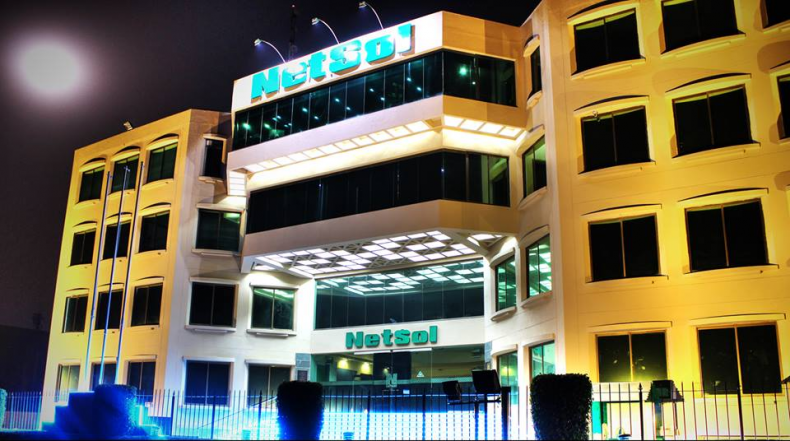 NetSol Technologies, Inc. (NASDAQ: NTWK) is a global provider of IT and Enterprise Software Systems and provides solutions to a global clientele in USA, Pakistan, England, Thailand, China, Australia, and Japan. Major offices of the firm are located in San Francisco, Lahore, London, Bangkok, Sydney, and Beijing. The major sources of revenue for the company are licensing, maintenance, and implementation servicing fees from a suite of financial applications under the name of NetSol Financial Suite (NFS). NFS is a robust suite of five software applications providing end to end financial solutions to the global leasing & finance industry. In addition, the company provides customized software development and implementation services to clients operating in a diverse set of industries. NetSol posses CMMI level 5 certification*.

Globally, NetSol competes with major providers of software solutions to financial industry which include, but not limited to, renowned names i.e. White Clarke, Fimasys, International Decision Systems, Data Scan, CHP Consulting, 3i info-tech, and Nucleus Software. Major customers are geographically diversified and include financing companies of big auto brands: Daimler, Toyota, and Nissan. NetSol generates one-third of revenue from these auto manufacturers. Also, the company generates more than 65% of revenue from Asia Pacific while the rest is equally divided between North America and Europe. 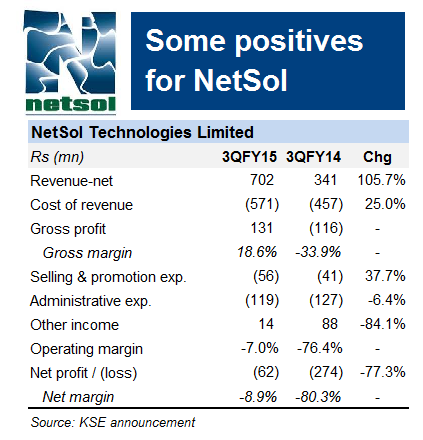 Over the years, NetSol exhibited a moderate growth in revenues (5-Yr Sale Growth Rate: 6.59%) which lagged Global IT Services & Consulting Industry (5-Yr Sale Growth Rate: 18.19%) (Source: Reuters). Growth has weakened due to aging of NFS system leading to reduced competitiveness. Weakened demand for NFS has led to lower revenue per deal and reduced number of deals over the years. In the full financial year ended 30 June 2014, the company announced a 30% YOY decline in annual sales due to lower volume and small ticket size of deals (only 2 deals above in excess of $1MM in FY2014 compared to 10 deals in excess of $1MM in FY2013). Lower revenue led to a loss in the bottom line of income statement after adjusting for operational and gross expenses in FY2014.

See also: Salim Ghauri talks about NetSol and his plans of launching an Incubation Center

Now, NetSol Technologies is in the process of replacing the legacy NFS system by a modern system “NFS Ascent”. The new system delivers improved performance based on an improved accounting system, better security, wide scalability, and enhanced robustness. The company is betting on the ability of the new system to improve competitiveness and profitability in future. Company earnings have improved in semiannual FY2015 results (Jun – Dec) with net sales posting a 30% YOY growth compared to corresponding period in FY2014. As per company disclosures, NetSol has signed one $16MM contract with a multi-finance group in Asia which will generate $10MM in revenue in the current year while the rest over five-year period in maintenance fees. On the other hand, the company is aggressively investing in the development of a support team for the new NFS Ascent system which is putting further downward pressure on profitability. Furthermore, the old legacy NFS system demand has fallen with the company making only two deals for NFS in 1HFY2015. The number of deals surrounding new NFS Ascent and legacy NFS system along with average deal ticket size is some of the metrics to look for in upcoming 3QFY2015 financials next week.

NetSol is experiencing a challenging situation with a slow market response toward the new product, NFS Ascent, and declining demand of legacy NFS product suite. The next few quarters are important and will determine the fate of NetSol Technologies.

*(Capability Maturity Model Integration (CMMI) is a process improvement training and appraisal program and service administered and marketed by Carnegie Mellon University and required by contracts in software development; Level 5 is the highest attainable level).