Windows 10 Falls Creators Update is finally here. The update was announced in Q1 2017 and every Windows user was waiting for the update since then.

You can check for updates in your Windows Update section to try your luck. However, if you are eager to try the new update and can’t wait for it to arrive in Windows update, you can install it now through Windows Upgrade Assistant. Windows Upgrade Assistant is a software from Microsoft which lets you install the latest version of Windows anytime. You just need to go to the Windows website and hit the “Update Now” button. The Upgrade Assistant will guide you through the rest of the process and you’ll have the latest version of Windows instantly. Moreover, you can also perform a clean install of Windows 10 Fall Creators Update by downloading and installing the ISO images.

Windows 10 Falls Creators update brings a number of new features. It now supports Windows Mixed Reality headset that goes on sale today. You can also access your contacts through the taskbar. There are some noticeable changes in the design department as well.

Moreover, Cortana can now turn off your PC, restart it or put it to sleep. Websites can now be pinned to the Windows Taskbar. Microsoft Edge now supports full-screen mode too. The new update also adds OneDrive files on demand which was a part of Windows 8.1 but Microsoft removed it from Windows 10 for some reason. Files on demand is a feature which will show you all the files in your cloud storage but will only download those files you manually select to download.

Are you excited about the new Windows 10 Fall Creators Update? 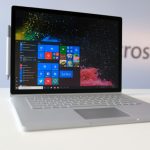