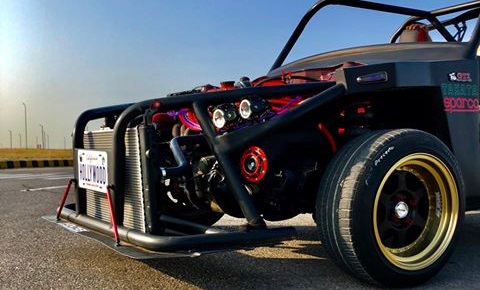 Atta Rafique, a youngster from Karachi who has built Pakistan’s first Exo-car without acquiring anyone’s help. It took 6 months of hard work for him to manufacture such technology in Pakistan.

The car is built from the parts used by other car manufacturing companies. Atta said that neither any Pakistani company nor the government supported him in this work.

Atta added, “A United States-based company has promised to sponsor me if I finalize my university project and we will take part in it as a Pakistani team with Pakistani flag on this car.”

His father was proud of him as he said: “He designed it (CAR) all by himself and not only fitting but everything he did was on his own.”

Exoskeleton cars have a visible external structure and made of aluminum, carbon fiber tubes or steel. They have open body style, with front wheels expanded in open instead of coming under the body. These cars are lightweight therefore they consume less fuel as compare to traditional cars.

Pakistan is doing great in the field of technology, as they are producing products that are not energy efficient but also cost-efficient. In the past few years, so much new talent has emerged that has proven itself.

Two motorbike assemblers in Sahiwal city of Punjab started working together to manufacture electric motorcycles in Pakistan. As the Petrol prices were rising in the country, it had become difficult for most of the middle-class motorbike riders to afford them. It was a need of time for Pakistan to shift to electric vehicles from expensive fuel.

A student from Lahore University of Management and Sciences (LUMS), Faaiz Arbab, who was enrolled in the MS Electrical Engineering program, had developed Pakistan’s first voice-operated wheelchair. He named it “GOBEE”.