Samsung launches 4 Galaxy S10 variants and a foldable phone, here are their details

In case you missed it, Samsung yesterday announced five new galaxy phones, Galaxy S10e, Galaxy S10, Galaxy S10 Plus, Galaxy S10 5G and Galaxy Foldable, each with a unique set of features and different design. If you are wondering about their expected prices in Pakistan, please head over to this link.

Considered by many to be the true rival of Apple’s iPhone XR, the all new Galaxy S10e also carries the same price tag as the iPhone XR, $750 with a flat display instead of Samsung’s characteristic curved display. This version of S10 is considered to be the budget version among the new Galaxy line-up, although the phone by no stretch of imagination can be considered in the budget category. With its 5.8-inch screen, this S10e is slightly smaller than the rest of S10 line-up and also has a smaller-capacity 3,100-mAh battery. It features a dual rear camera set-up and similar to the Galaxy S10, a single front-facing shooter displayed through the punch-hole display with a fingerprint scanner on the power button. 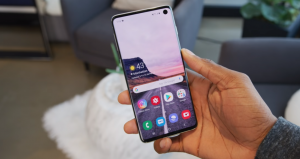 Perhaps the most balanced phone in terms of size in this new line-up is the Galaxy S10, the phone starts at $899 and comes in two variants, 8GB + 128GB or 8GB + 512GB. Equipped with Qualcomm’s latest and greatest Snapdragon 855, S10 will prove to be a good competitor to Apple’s iPhone XS. Equipped with the world’s first ultrasonic in-display fingerprint sensor, the phone also features a punch-hole display, thereby increasing the overall screen to body ratio to 90%. 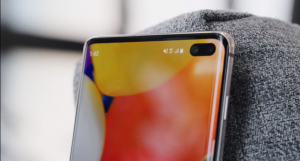 The crown jewel of Samsung’s current Galaxy line-up, the Plus version features the best Samsung has to offer. The S10 Plus starts at $1000 and features the company’s best AMOLED display at a massive 6.4-inch screen and a whopping 4100 mAh battery. The phone also features a rear triple camera set-up and a dual front-facing camera-setup and comes in three variants, 8GB + 128GB, 8GB + 512GB and a whopping 12GB + 1TB. 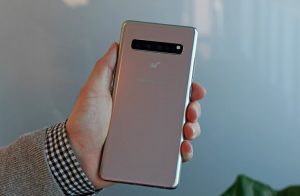 The last version of the Galaxy S10 lineup is the Samsung Galaxy S10 5G, which is also the most premium phone of the lineup. The phone comes with a whopping 6.7-inch screen, a 4,500mAh battery and four rear cameras, consisting of the same three cameras in S10 and S10 Plus. On top of that, there’s also a 3D depth-sensing camera, which will be useful for augmented and virtual reality and well as facial recognition. There’s also a 3D depth-sensing camera on the front, alongside a normal 10MP snapper.

Samsung Galaxy S10 5G comes with 8GB of RAM, 256GB of storage and a microSD card slot. So it doesn’t have as much RAM as the S10 Plus. The price of the phone hasn’t been revealed yet since the phone won’t be launched until later in the year when mobile networks start rolling out their 5G signal across the globe. 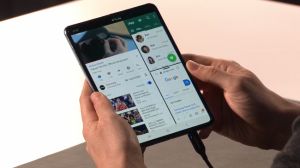 Perhaps Samsung’s most anticipated phone ever since it was teased back in November 2018, the engineering marvel surely stole the show in the Samsung event. Starting at a jaw-dropping $1980, the phone is a hybrid of a smartphone and a tablet, something completely different from the traditional ‘Phablet phone’.

The foldable phone has six cameras in total, on the outside of the device you have a triple-camera arrangement that’s pretty similar to the new Galaxy S10, meaning you have a dual aperture main camera, an ultra-wide camera, and a zoom camera. When folded the phone offers a single selfie camera, however when unfolded the phone like the Galaxy S10 Plus offers a dual front camera setup, making a total of six cameras located at three different positions. 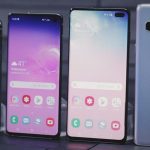