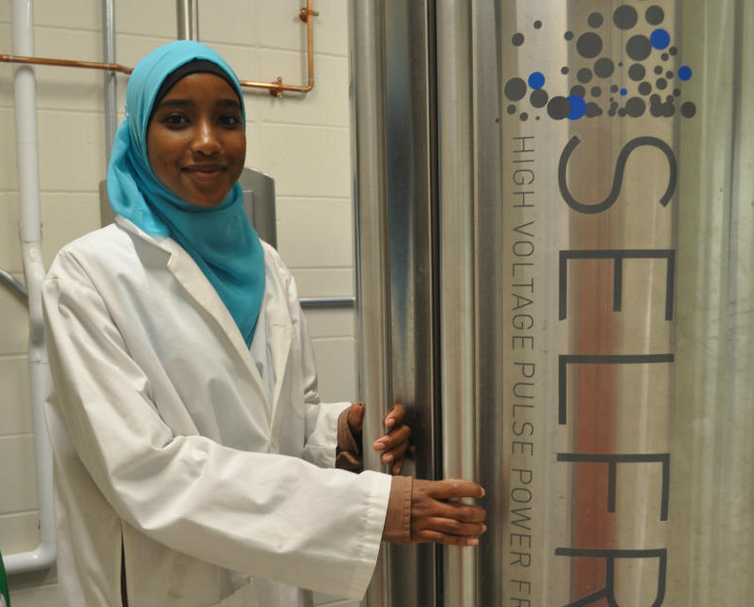 A Muslim student from the University of Alberta has found a cutting-edge procedure to extract diamonds, an achievement which is making waves among the circles related to mining engineering.

The student, a young student who is just 17, found the new extraction technique as part of her WISEST Program at the University of Alberta. Hamdi Ali, a Muslim student, got an opportunity of doing a paid summer research under the WISEST program during her 11th grade. While working at the Geology department at the university, Hamdi came across SELFRAG, a machine which she used to extract diamonds in a much efficient way. SELFRAG is a relatively newer machine which is used to demolish rocks using ultra-high voltages, usually in excess of 200,000 volts.

Hamdi started working on using this machine to electrically separate diamonds from the rock. It was originally being anticipated that the results would be improved very marginally. To everybody’s surprise, even the first experiment was able to produce undamaged diamonds way more reliably than the traditional methods.

“You don’t need to have a Ph.D. to do good scientific research,” Margo Regier, her mentor at the program said in a TV interview. “You just need to have a new idea and you need to work hard to make sure it happens.” A University of Alberta’s Faculty of Science feature mentions, “There aren’t many grade 11 students who can say they spent their summer conducting research at the University of Alberta. There are even fewer who can say they spent their summer break discovering a new way to liberate diamonds from kimberlite, their host rock. In fact, there may just be one. And her name is Hamdi Ali.”

Even the manufacturers of the SELFRAG machine were surprised by this procedure and as they themselves didn’t know of this potential of the machine.

WISEST, which is a short form for Women in Scholarship, Engineering, Science, & Technology, is a specially crafted program by the University of Alberta which promotes the adoption of STEM fields among the female students. Science, technology, engineering, and mathematics-related fields have often been pointed out as fields which gather low female students.

TechJuice has also been trying to highlight this issue through a dedicated series under the title of “Girls Can Code”. Under the initiative, TechJuice got in touch with notable Pakistani women who had been working in engineering/coding fields. You can know more about our this initiative and read the stories of featured women through this link.