2 day workshop for entrepreneurs and startups held by PSEB

Startups are the new trend on Pakistan IT horizons. Several incubation houses, academic reforms and independent entrepreneurs have made it to the news within the last couple of years. Some of these setups have showcased great successes. Currently, there are more than 100 startups under incubation process across Pakistan at Karachi, Lahore, Islamabad and Peshawar.

As part of the same efforts, Pakistan Software Export Board (PSEB) recently conducted a 2 day workshop on “Launching of a successful startup”.

This workshop was held at National IT Board, Islamabad and covered the entrepreneurs and startups from Islamabad, Rawalpindi, and Peshawar. This is unique because the major IT sector news and stories in Pakistan are usually emerging from Karachi and Lahore, whereas this workshop was focused on cities other than them. This is a sign of a good change as the saturation of IT sector resources and industry should not be focused on just some particular cities in Pakistan.

The trainer for this workshop was the respected Mr. Azhar Rizvi, who is Vice Chairman of MIT Enterprise Forum Pakistan.

The workshop unfolded with discussions and presentations regarding:

Within that discussion, Mr. Asim Shahryar Husain, Managing Director of PSEB, addressed the participants regarding the contributions of PSEB last year and what are its consequent plans for the years to come.

Highlighting further, Mr. Asim said that the board is nesting several industry support programs for IT companies and startups, which include:

He stated that the objective of PSEB to launch such workshops is to funnel and help IT startups and Small / Medium enterprises in order to act as a catalyst for growth of these businesses, attracting investors and customers.

The workshop also showcased the PSEB documentary, which is produced especially for the IT industry of Pakistan. The documentary displayed several success stories of different startups and companies of Pakistan and put up the banner, that why Pakistan is an attractive destination for IT outsourcing and investment.

Within the same workshop, the Minister of State for IT, Ms. Anusha Rehman, stated “Ministry of IT has declared 2015 as the year of IT for Pakistan. On the similar lines, the ministry has also passed instructions for PSEB to conduct several workshops in order to help out startups and young entrepreneurs with regards to technology, growth of their businesses and exports.” She added “Government’s goal is to create an enabling environment and infrastructure for the IT industry including startups. That is why the ministry of IT is also in the process of launching a new technology incubator for startups by next year.”

She also said “According to State Bank of Pakistan, IT remittances have grown by 41% since last year and IT exports are 10% of Pakistan’s total services exports at present. She mentioned that Pakistan is in Upwork’s top 5 freelancing countries which is now the world’s largest freelancing network.” Furthermore, she said “IT companies should report their foreign remittances through the banking channel so that PSEB can get a better picture of IT exports of Pakistan.”

The workshop’s second half, included an informative session about “finding international clients”. This was conducted by CEO of Discretelogix, and it also packed the presentation regarding “filling the business plan template”. The workshop concluded its Day 1 with a presentation regarding “Elevator Pitch and it’s delivery to a potential customer”.

Day 2 of the workshop started with the startups presenting their business plans and getting feedbacks for further improvements. As the day progressed to its second half, two more presentations were conducted; from the vice president LMKT and CEO of DPL highlighting the success stories regarding their journeys from a startup to ten million dollar plus companies at present.

Also among the speakers that day was Country Manager of Microsoft Pakistan, Mr. Nadeem Malik, who conversed about “sales and marketing techniques for software and services”.

General feedback regarding the workshop from the participants was satisfactory. They gained useful information about business planning, sales, management and getting the right customers in an effective manner.

As per their current plans, PSEB will be conducting similar workshops for startups and SMEs in Lahore, Karachi, and some other cities of Pakistan. 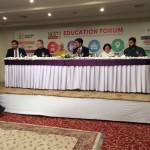