AI will replace a huge chunk of human force by 2030 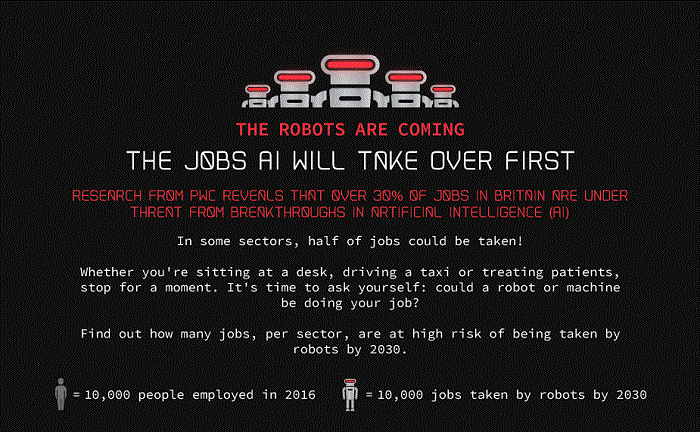 We know how AI has made lives better. Not only can it perform tasks better and faster, but it can also do that while keeping the costs minimum. The other advantage of AI is that it excels in mundane tasks and it does not need holidays. These attributes have boost its popularity and have forced many companies to implement AI based systems. With every passing moment, more firms are replacing tradition workforce in favor of AI-based automated systems.

A new infographic published by RS-Online shows which jobs we can expect AI to influence the most. In some case,s around 50 percent of the workforce will be free to make way for automated systems. While conventional jobs employ less humans, new employment opportunities will be created.

The interesting thing was that AI will replace the least amount of humans in education departments. Education could still employ humans for their ability to connect with students and use these tools to further develop a complicated system. We are not saying that AI will not influence education, it will just not replace the human workforce so quickly.

Transportation will understandably see a huge part of its jobs being allocated to AI. We have seen autonomous cars and trucks gaining more popularity. There are dedicated startups like Otto trucking that are developing self driving trucks. So as they become smarter, humans would be forced to leave truck driving. Self driving trucks are supposed to safer and come with the added benefit of operating 24/7.