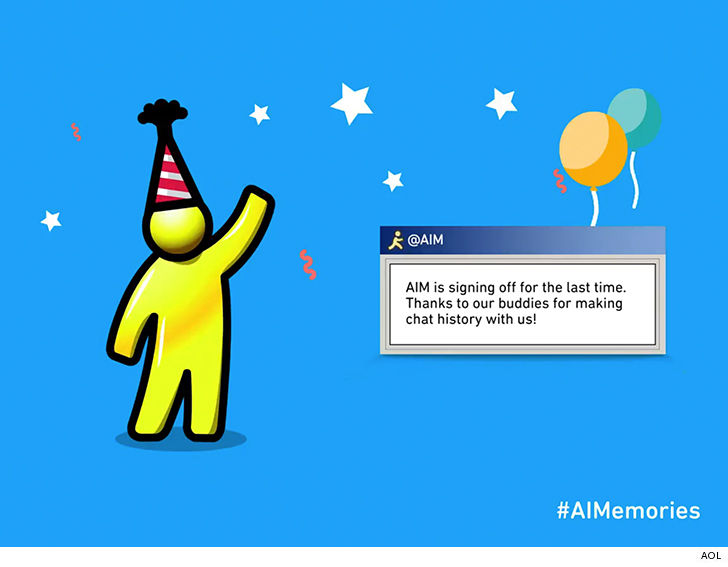 AOL Instant Messenger (AIM) was a big part of the 90’s people’s lives at some point. The messenger was launched in 1997 and it was one of the first instant messaging services. But no one uses the AIM today and the company has finally announced to shut it down.

Although AIM introduced a new way of how people interact and changed the lives of many people but that was a long time ago. Now the technology has evolved and people have found new ways to interact with each other. AIM acknowledges the fact and announced that it will be shutting down the service on December 15th, 2017.

Here’s what AOL had to say about this:

“AIM tapped into new digital technologies and ignited a cultural shift, but the way in which we communicate with each other has profoundly changed. As a result we’ve made the decision that we will be discontinuing AIM effective December 15, 2017. We are more excited than ever to continue building the next generation of iconic brands and life-changing products for users around the world.”

The news of AIM death was a long time coming. The messenger is in the dark now for almost a decade now and there are a lot of other services to communicate like WhatsApp, Facebook, and Skype and there seems to be no way AIM can compete with them.

AIM left a lot of memories with it. There was a time when almost everyone was on AIM and people used to spend hours to chat with each other. A lot of friendships started and ended on AIM. People used to talk to their loved ones living abroad and it was one of the few communication mediums available to talk to anyone around the world for free. Students used to instantly log in to the AIM as soon as they return from college to talk to the same people they just left at the college gate.

After today’s announcement, people on are tweeting about their memories with AIM using the hashtag #AIMemories. Here are a few of them.

I broke up with my 6th grade boyfriend over AIM. To get back at me, he made fun of my username. I cried. #AIMemories https://t.co/xFinjHKrvq

My screen name was Birrc6361 and that stood for “Barbara is really really cool.” #stillaccurate #InMemorAIM

Shooting your shot with your crush and then saying your friend hacked your account when it didn’t go well. #AIMemories

AOL Instant Messenger’s ‘Away Message’ helped me become the Twitter user I am today. #AIMemories

I think the last tweet should just say “brb.”

:’) a time that won’t ever be matched in the future

I met my first girlfriend on AIM. She turned out to be a 54-year-old man in Laos but still. #AIMemories