Slow and steady wins the race, the good old story seems to be the only way for cryptos to live a long life and they may have to ditch their volatility.

After having a really tough time during the last couple of months, the crypto market is finally headed towards a stable price point, as total crypto market cap hits 7-week high at $400 billion. Bitcoin has retaken the $9,200 spot, citing a slight increase from last week’s price point, whereas Ethereum is over $680 and Ripple has risen above $0.90 (as of writing).

Of the top ten coins on CoinMarketCap, Bitcoin Cash is up the most, more than 12 percent over a 24 hour period to press time, and trading at around $1,400. Its price has risen almost 85 percent in the past week.

Goldman Sachs, which had previously refuted claims it would open a crypto trading desk – although the bank has owned a stake in one since 2015 has recently reported that they have hired crypto trader Justin Schmidt to lead their digital assets markets and help clients gain exposure to crypto. This announcement resulted in an immense increase in prices of coins in the whole crypto market, as previously noted by Bloomberg about Barclays announcement.

Meanwhile, this weekend has seen some potentially good news for crypto regulation. In India, a crypto company has filed a claim against the Reserve Bank of India (RBI) for their earlier decision to end dealings with crypto-related entities, claiming the ban is unconstitutional. RBI has until May 24 to respond to a notice, then reportedly issued by the High Court of Delhi. 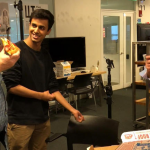 This MIT Gadget can order pizza just by hearing your thoughts