Cellular networks to be suspended on Defence Day in Islamabad

In the wake of Defence Day, Interior Ministry of Pakistan has decided to suspend mobile phone services in Islamabad and nearby areas. This is not the first time government has taken such a step. In past, we have witnessed government suspending mobile phone services on national and religious holidays to avoid any unexpected incident which can create chaos.

The ministry of interior has stated that all cellular networks in Islamabad and adjoining areas like Rawalpindi will be suspended from 11 am to the end of the ceremony, on the eve of Defence day.

This step has been taken as a security measure to avert any harmful incident. Similar steps had previously been taken by the ministry, especially on the occasions on Ashura whereupon Cellular networks were suspended in more than 80 cities. Government has been heavily criticised on taking such security measures. Th former minister, Rehman Malik, in past, had to face a lot of criticism and mockery on social media due to taking such decisions but we haven’t seen the government going one step further and identifying a better solution than simply suspending the networks. 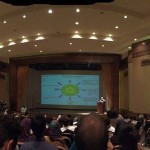