During a panel discussion at the ‘Gen D – Nurturing a Digital Pakistan’ event held by The Millennium University College, Jazz’s Chief Business Officer Ali Naseer stated that, “connectivity has now become a fundamental human right and all governmental initiatives in the ICT arena must take that into account. As a country lagging behind its peers, Pakistan cannot implement policy decisions that don’t drive this objective.”

He mentioned that despite good progress in terms of connectivity and the availability of digital technology in the last few years, Pakistan is still behind globally. “Even today, half of Pakistan is offline. This is the reality despite all the gains of the last few years. Unless immediate attention is given to this, Pakistan’s proclaimed ‘digital dividend’ may, unfortunately, turn into an unavoidable ‘digital divide’.

“The policymakers deserve credit for taking necessary steps, including the right of way policy, granting industry status to the telecom sector, and reducing WHT and FED on services. However, instead of focusing on incremental improvements, we need bold steps to harness the true potential of digitalization,” he added.

“For example, it is highly impractical to expect a digital revolution when a large number of people own and use 2G-only handsets. Out of the 13.05m mobile phones locally manufactured between January and August, 5.48m were 4G compatible smartphones. The government must cut the cord on both the import and local production of 2G phones. Widespread penetration of 4G will boost digital adoption and unlock tremendous socio-economic opportunities for masses,” he mentioned.

“Globally, the adoption of digital technologies is taking place at such a rapid pace and scale, that we simply cannot compete without the right public-private partnerships that implement a holistic digital ecosystem at the grass-root level.” Giving a small example, Ali mentioned that Pakistan only contributes 0.1 percent in the global cloud market, which is bound to remain constant in the years to come.

To break this cycle and speed up the adoption of digital technologies, Ali Naseer stressed the importance of bringing people, who were connected to cellular networks but not using the internet, online. He urged both the industry and policymakers to make a substantial transition towards a smart society envisioned under the ‘Digital Pakistan’ initiative. 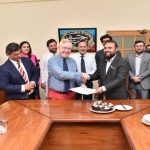