The Election Commission of Pakistan has linked 70,000 polling stations to Google Maps for the upcoming general elections, enabling voters to find their respective polling stations with ease.

In a high-level meeting chaired by Chief Election Commissioner, Justice Sardar Muhammad Raza, this recent move by ECP was discussed for consideration. With the help of the app, users will also be able to calculate the distance to their nearest polling station.

Google Maps app has become very popular in recent times and used to navigate through unfamiliar terrain. The application has an offline navigation feature which comes in handy where internet access is not good.

Apart from the Google Maps facility, ECP also decided to ensure the provision of all basic facilities such as water and uninterrupted electricity at all polling stations across four provinces.

Few days back, Google Maps was called in by officials of Pakistan and Afghanistan to resolve the border dispute between the two countries after a deadly attack by Afghan forces on Pakistan’s census staff and security personnel.

“Officials from the geological survey departments of the two countries will conduct a survey, and they will also make use of Google Maps,” said a senior Pakistani security.

Chief Election Commissioner lauded the work of staff and decided to showcase the Google linked polling stations to media and political parties in near future. 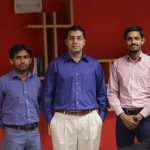