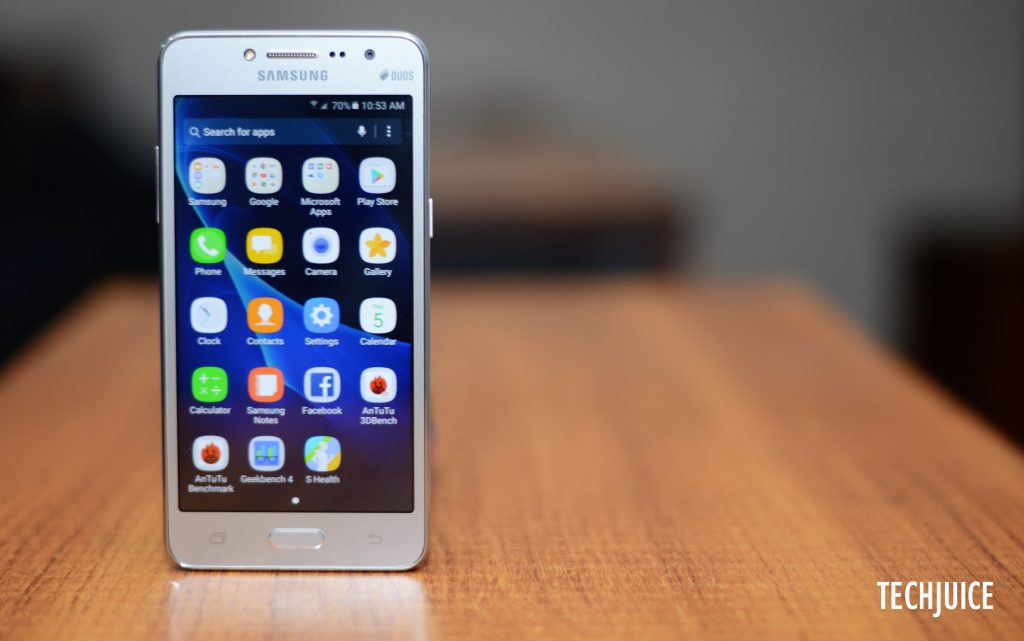 Samsung might be known today for its flagship devices, but this wasn’t always the case. It gained its popularity by offering a cheaper alternative to iPhone in the days when smartphones were few and far between. It is said that even if a tree grows a hundred feet tall, it must always look towards its roots for support. Same is the case with Samsung. Even though it has established itself as a leader in the flagship smartphone market, it still pays a lot of attention to its low-end devices.

Galaxy Grand Prime+ is a continuation of the legacy that previous devices by Samsung have built. It is marketed towards mid to low-end device users, a market segment that is growing in size day by day. Customers in this category are expecting a lot more bang for their buck these days. Does Grand Prime+ live up to their expectations? Is it worth choosing against the swarm of cheap Chinese phones currently washing over the entire market? Let’s try to find answers to these questions together. 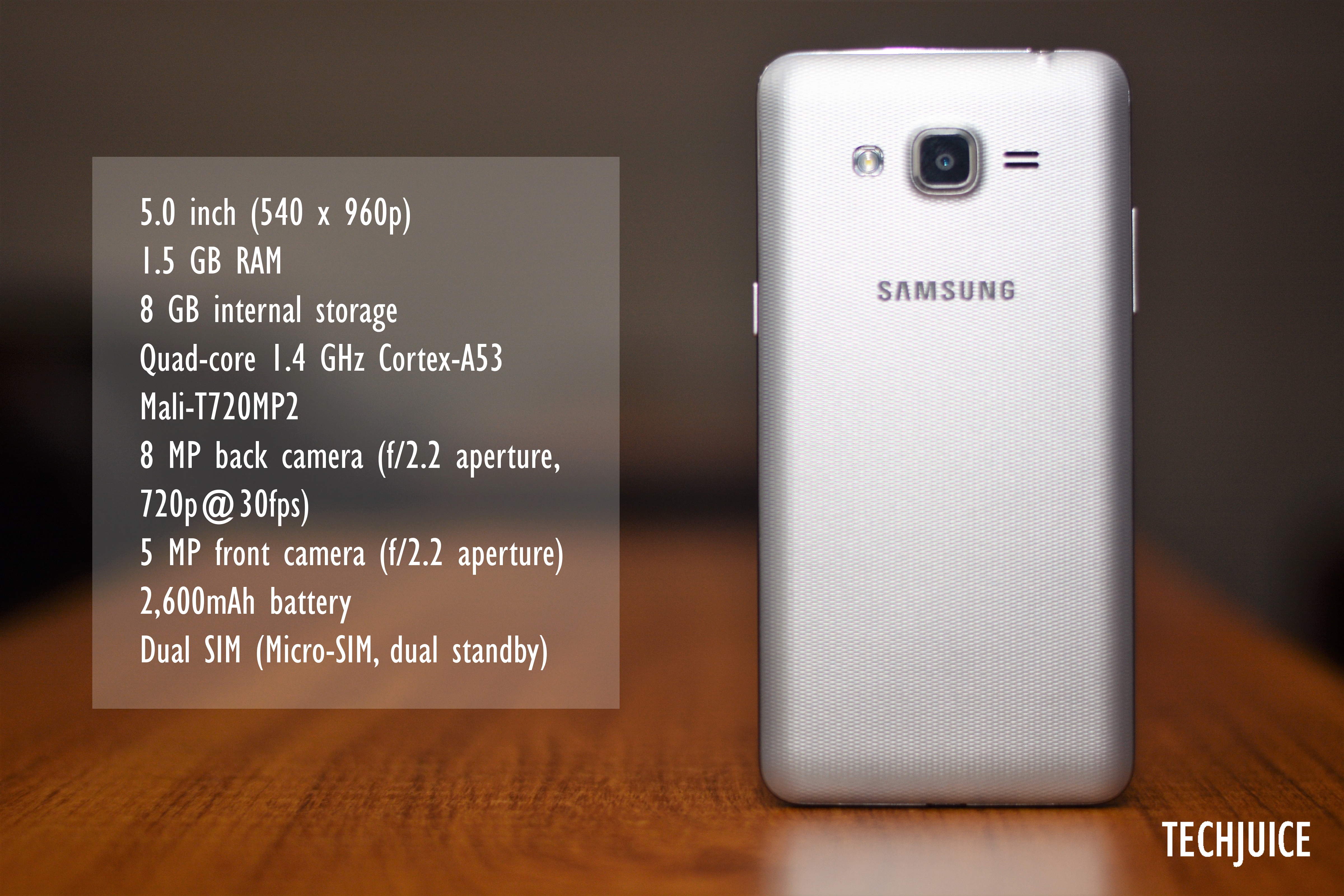 What you get in the box

Before talking about the device itself, let’s first take a look at what you get in the box. 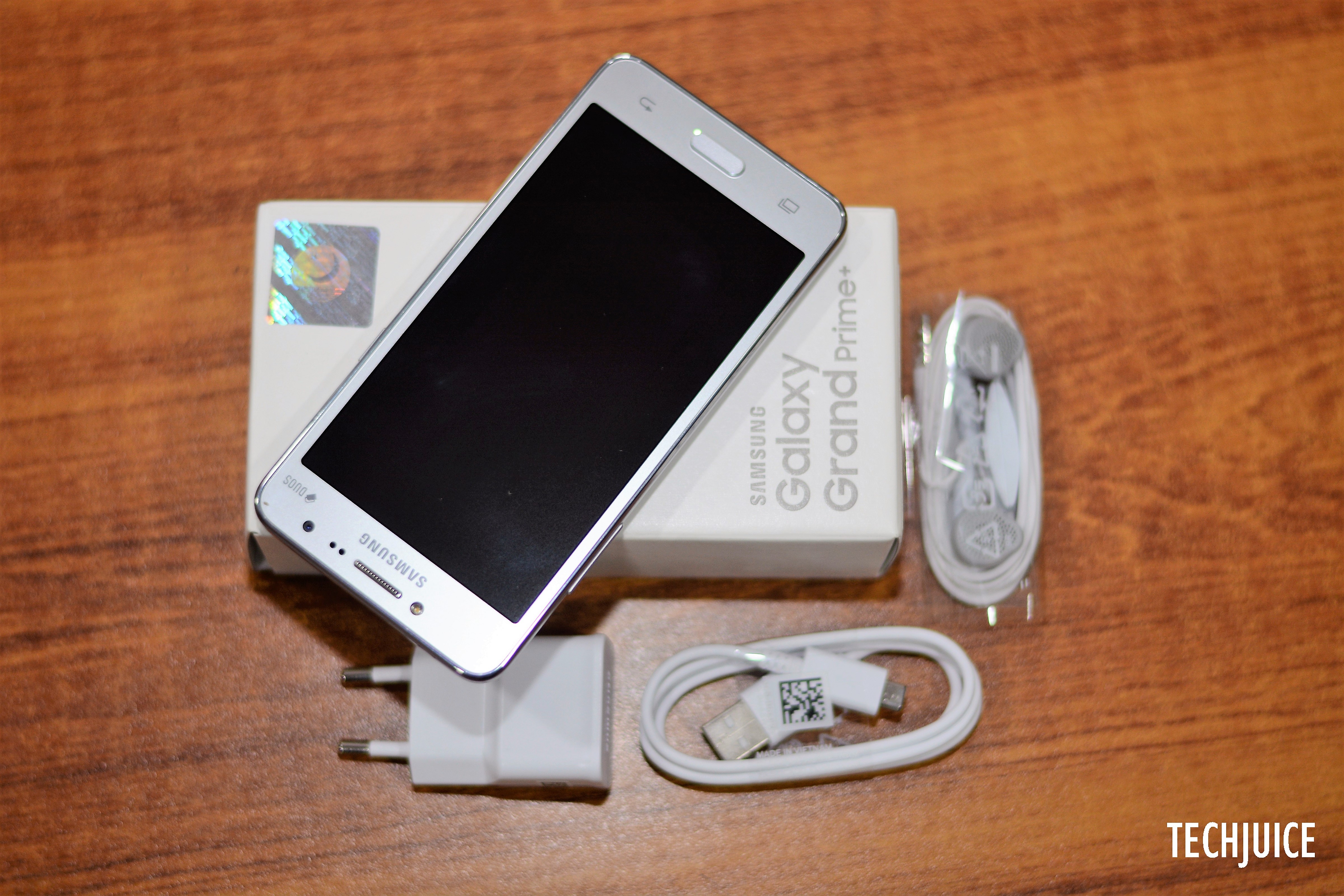 It won’t be an understatement to say that Samsung is not trying to surprise anyone when it comes to accessories provided alongside the phone. I can’t remember the last time when I unboxed a Samsung phone and it didn’t have the iconic white handsfree along with the charger cable in it. The wall socket uses a USB-A to microUSB cable and is rated at 5V/2A rating. There is also some documentation and product information which I am sure most of your will love to read (not). 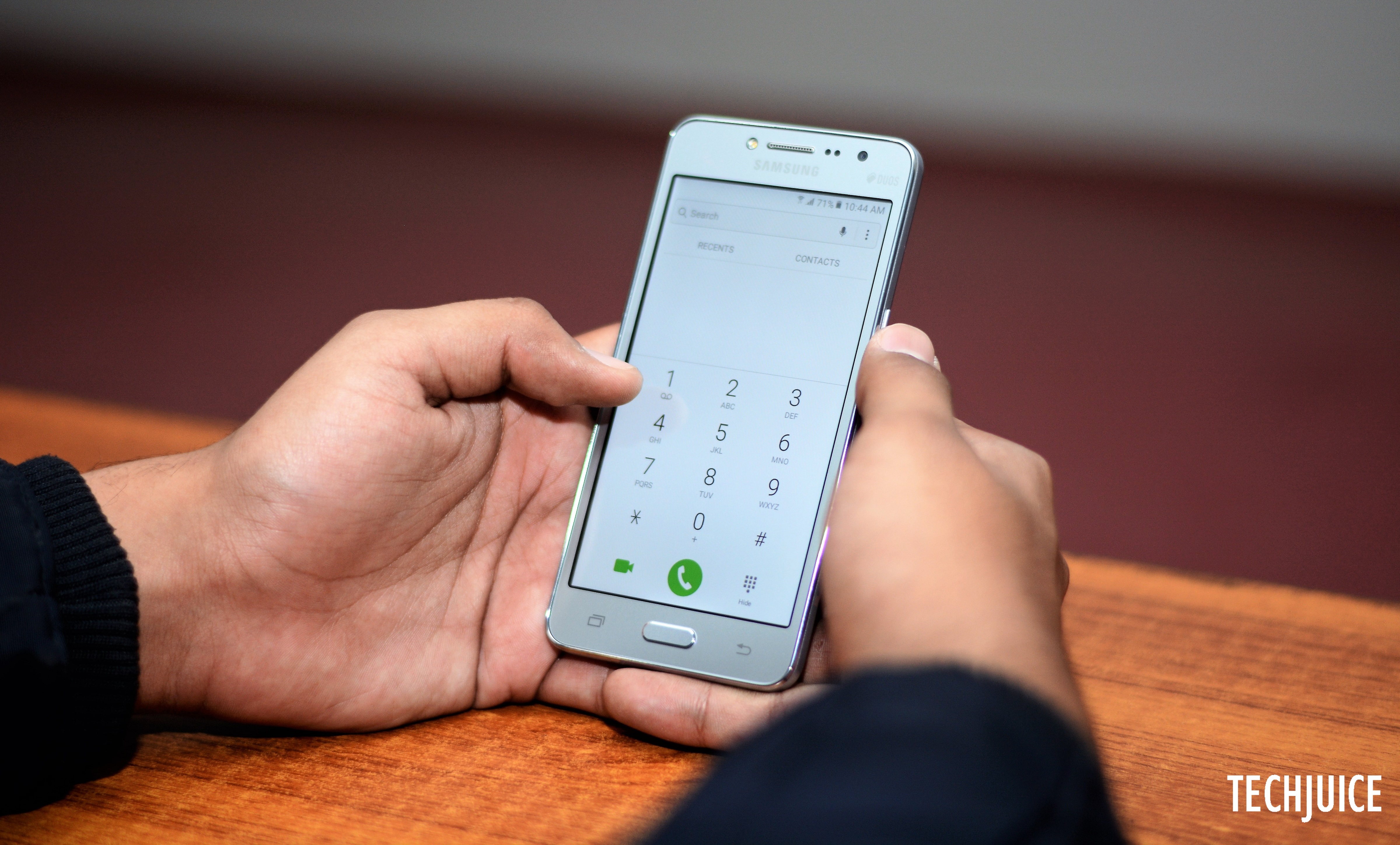 Samsung has always been known to take a calculated and measured approach when it comes to designing smartphones. There hasn’t been a lot of variations in the looks department other than in the higher end Galaxy devices. This device is no exception. A keen eye is needed to differentiate between this and other devices of the same series. 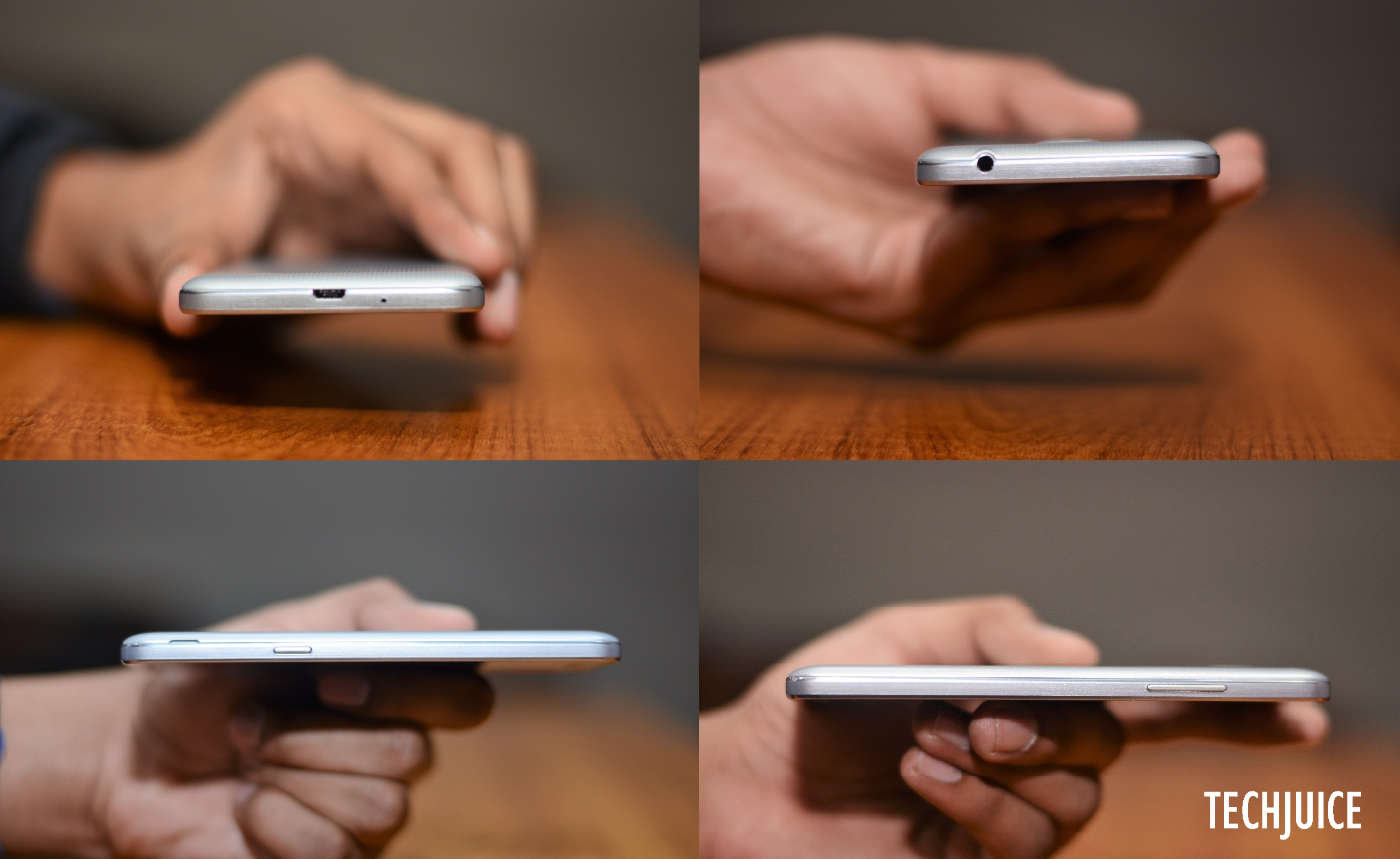 The back panel is removable and it gives access to the battery, microSD slot, and the microSIM slot. SD card and SIM card are hot-swappable, meaning they can be removed or replaced without turning the phone off. The back panel is firmly attached via a series of clips which extend all around the length of the device. In my experience, there is no creaking or squeaking noise when the back panel is slipped in place.

Now we come to one of the weakest points of the device, its 540p display. A sub-HD resolution is already pretty bad compared to today’s standards, add to it the fact that it is stretched across a 5-inch display and you get the disaster that is Grand Prime+’s display. Although the phone provides good contrast and colors, pixels are clearly discernible even at a small distance away from the screen. The glass is neither scratch resistant, nor it has an oleophobic coating. The end result is a vulnerable fingerprint magnet which needs a swipe of the shirt from time to time.

Grand Prime+ is running the latest “Grace TouchWiz UI” by Samsung. It is an interesting approach towards the Android UX and it packs a lot of nice features. My biggest and perhaps the only complaint with it is that it seems too cartoonish at times. It sometimes just doesn’t fit with the “Material Design Language” of Google which so many other apps follow.

Samsung has packed some extra features into the software like one handed operation, device maintenance, and easy mode. These features work as advertised and certainly work to improve the overall software experience of the device.

Grand Prime+ is a budget phone. It is not meant to blast past benchmarks and leave every record smashed. Samsung has given it enough oomph to make sure that it flies past small daily tasks with ease. There is no noticeable slow down or lagging when browsing websites, switching between apps, taking pictures etc. It didn’t falter once while going through these operations. It also runs some light games like Temple Run and Subway Surfer without causing too much strain on the hardware.

However, if you are planning to do some hardcore gaming on this mobile, look elsewhere. Its Antutu and Geekbench scores are average at best and are indicative of its weaker chipset.

Grand Prime+’s internal storage can be a concern for some customers as it has only 8 GB of internal storage; more than 4 GB of which is taken up by the system. So in the end, you are left with less than 4 GB to get your apps up and running. I frequently ran into low storage warnings during my usage of the phone. Thankfully, there is a microSD slot which helps cope with the issue a bit. 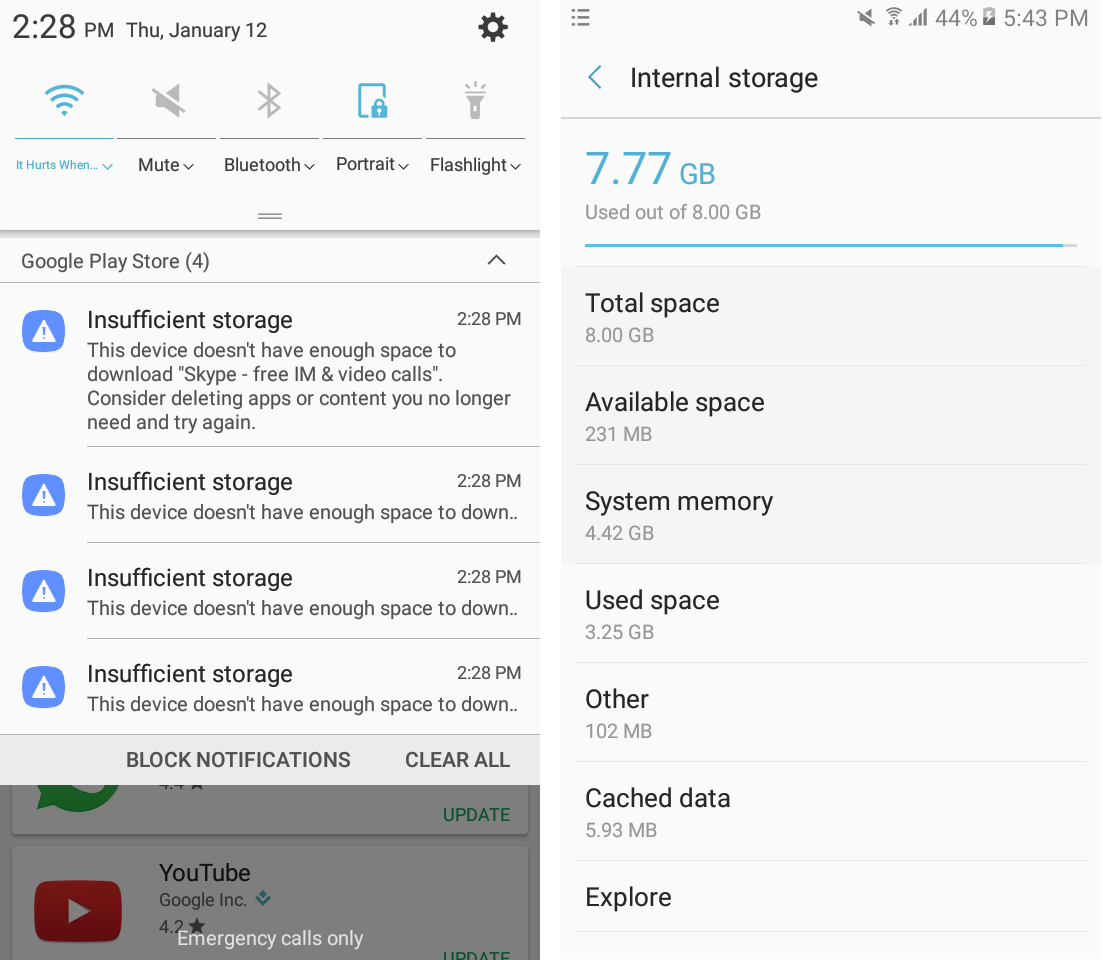 Battery life on this phone is another point in its favor. With a 2600 mAh battery, 540p screen, and power efficient chipset, no matter what you throw at it, you can expect the battery to last a whole day easily. Even after a full day of medium to heavy usage, I always had about 30 percent battery left at the end of the day.

Now we come to one of the surprisingly weak parts of Grand Prime+. Samsung is generally expected to offer good quality cameras, irrespective of the price bracket. It doesn’t seem to be the case here. The pictures captured by the 8 MP camera in the back turn out to be mostly dull in color and lacking in details. Post processing usually messes up the photo and there is a lot of noise when even a little bit of sky is visible in the frame. Overall, the camera experience is pretty average and not up to Samsung’s, or even today’s standards. The front-facing camera, a 5 MP shooter, is perfectly adequate for casual selfies. Nothing more and nothing less. You can check out some images taken from of this device here.

When you buy a budget device, you tend to purchase some compromises along with it. That’s exactly the case with Grand Prime+. You are getting a good device for the money you are going to pay for it, but there are some compromises that tag along with it. These compromises are its 540p screen, average camera, and some storage issues (although this can be remedied to some extent by using an SD card). If you think that these compromises are worth about PKR 15,600 (current price of Grand Prime+), you should be very happy with what else this phone has to offer. 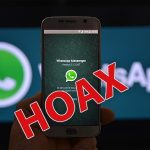