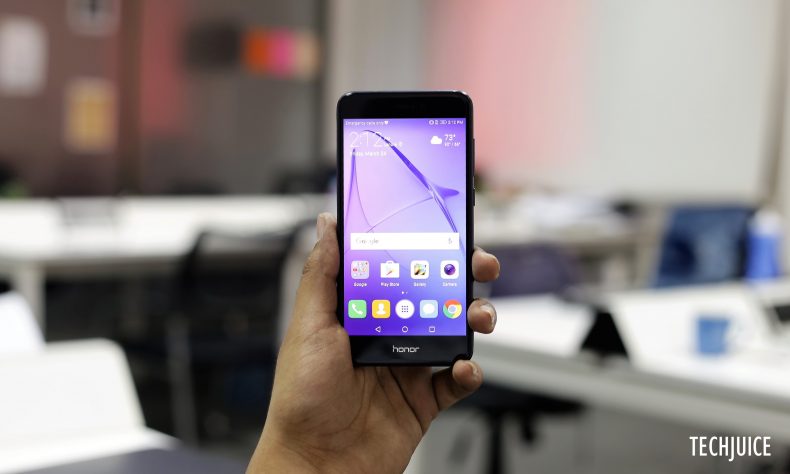 Huawei is known to be one of the best in business when it comes to offering good value for money. This dedication towards providing as many features as they can in as little price as possible has made them very popular among users of emerging countries. Recently, with devices such as Mate 9 and Honor 8, they have tried to step up their game in the flagship department as well. Honor 8, especially, was lauded for its beautiful design which left onlookers stunned for a couple of moments. With Huawei Honor 8 lite, Huawei is bringing some design elements of Honor 8 to a lower price point. Through this Huawei Honor 8 lite review, let’s take a look at how well does this device fare when put to test in the real world. 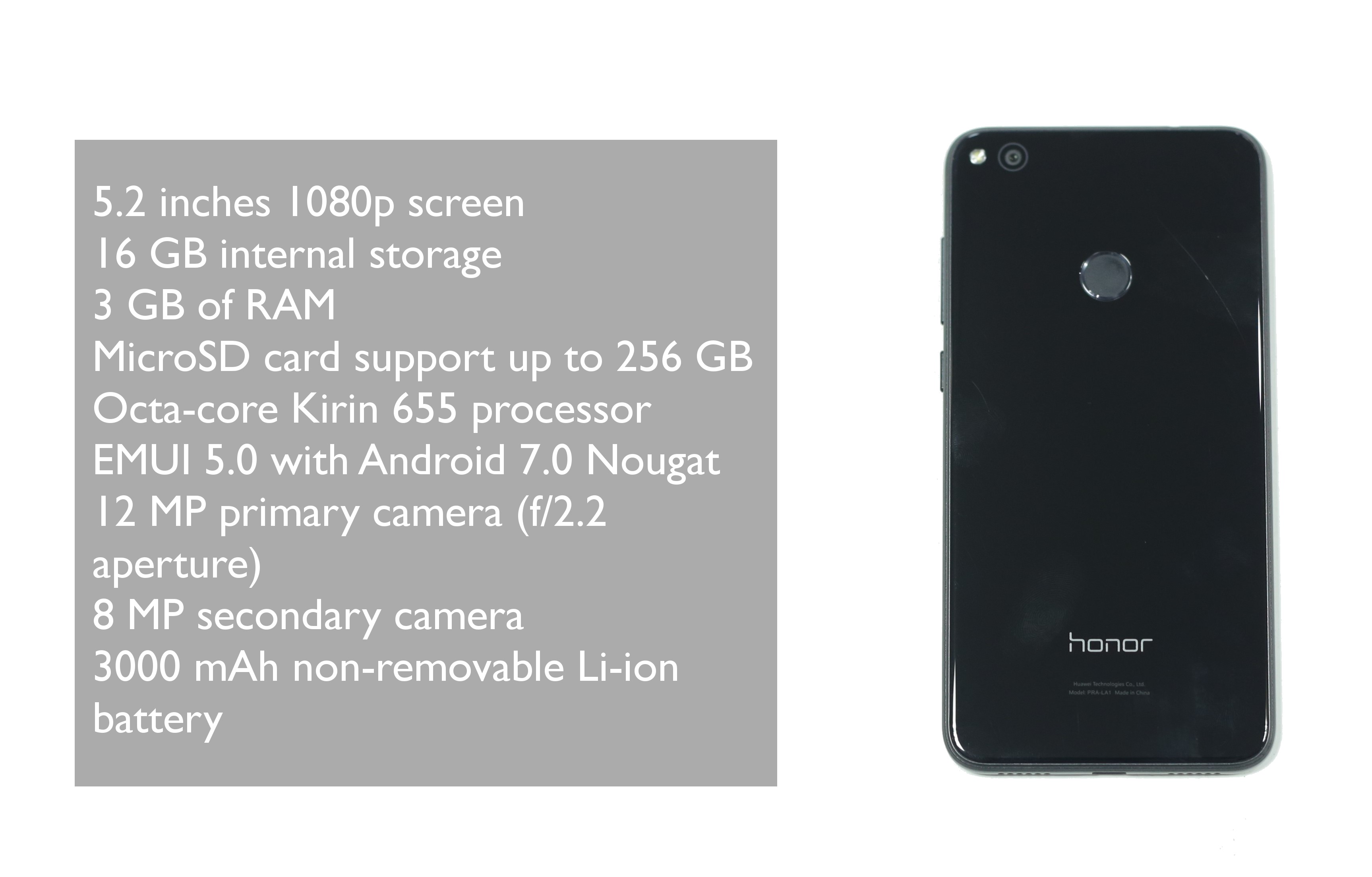 Before going into detail about its different features, here’s a bird’s eye view of Honor 8 lite.

Key good points of this smartphone are:

Not everything is fine and dandy with this phone. These are the issues which might bug some users:

Huawei and some other Chinese companies are known for providing a great number of accessories and add-ons in the box. This is also true for Honor 8 lite. Here’s a breakdown of what Huawei ships along with the phone:

Huawei Honor 8 lite is very similar to Honor 8 in both design and build quality. It inherits the same glass back of Honor 8 but loses the unique reflection pattern of original device in the process. It still looks pretty damn good and will definitely turn a few heads. It’s quite understandable if you buy this phone solely for its looks. You probably shouldn’t, but it’s understandable nonetheless. 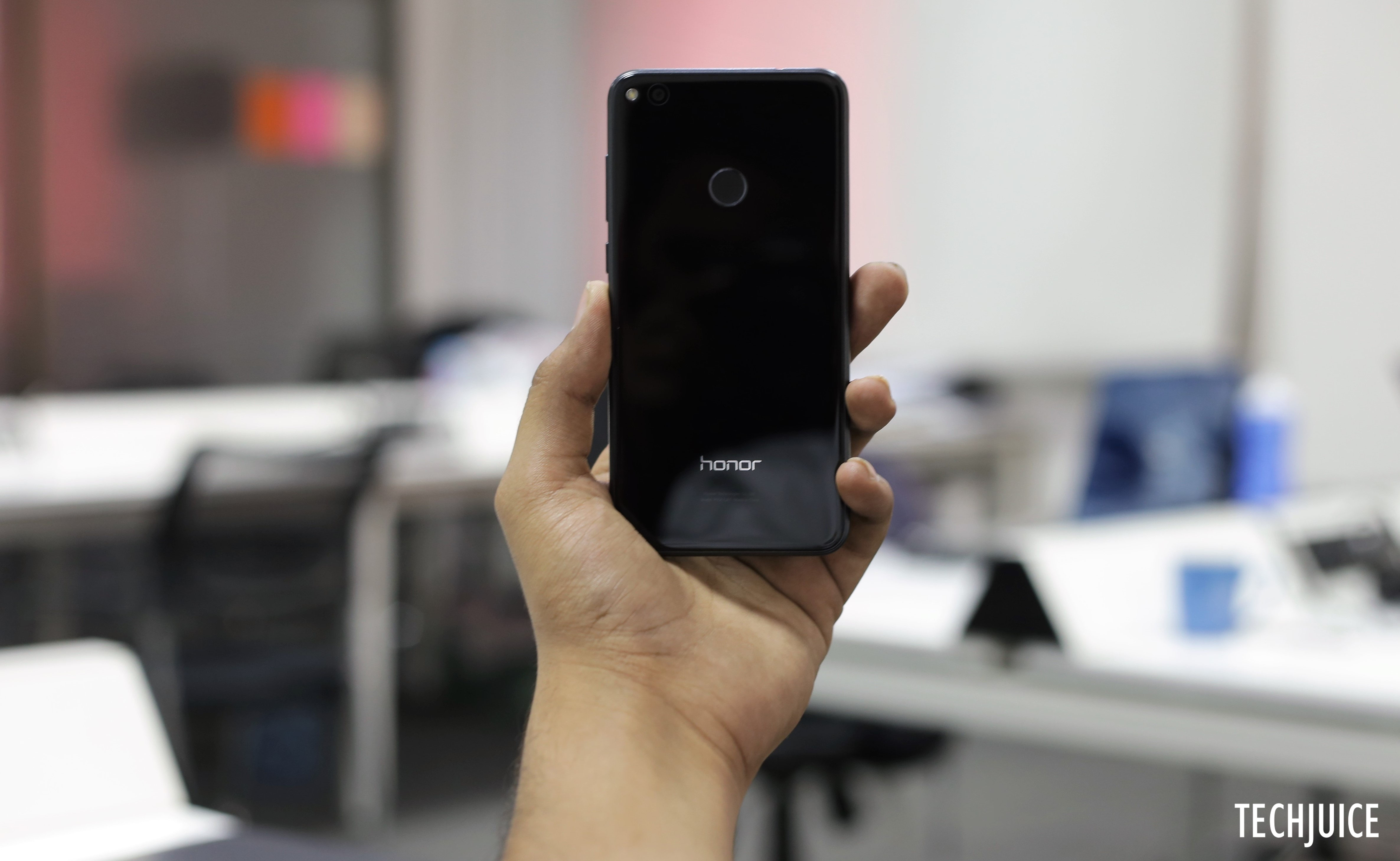 The problem with glass back and the front is that glass is more fragile than plastic or metal. Add to it the absence of Gorilla Glass and it’s an accident waiting to happen. So this raises some concerns about the durability of this phone. There is a high chance of getting scratches all over your new and shiny Honor 8 lite if you are not careful with it. Thankfully, Huawei does provide a back cover in the box to make sure there is that extra bit of protection available.

Button placement is a pretty standard affair on Honor 8 lite. The right side houses the power and volume rockers, while the left side has the SIM1 plus hybrid SIM2/microSD card slot. The speakers and microUSB slot are at the bottom of the device while the top side has the 3.5mm headphone jack. 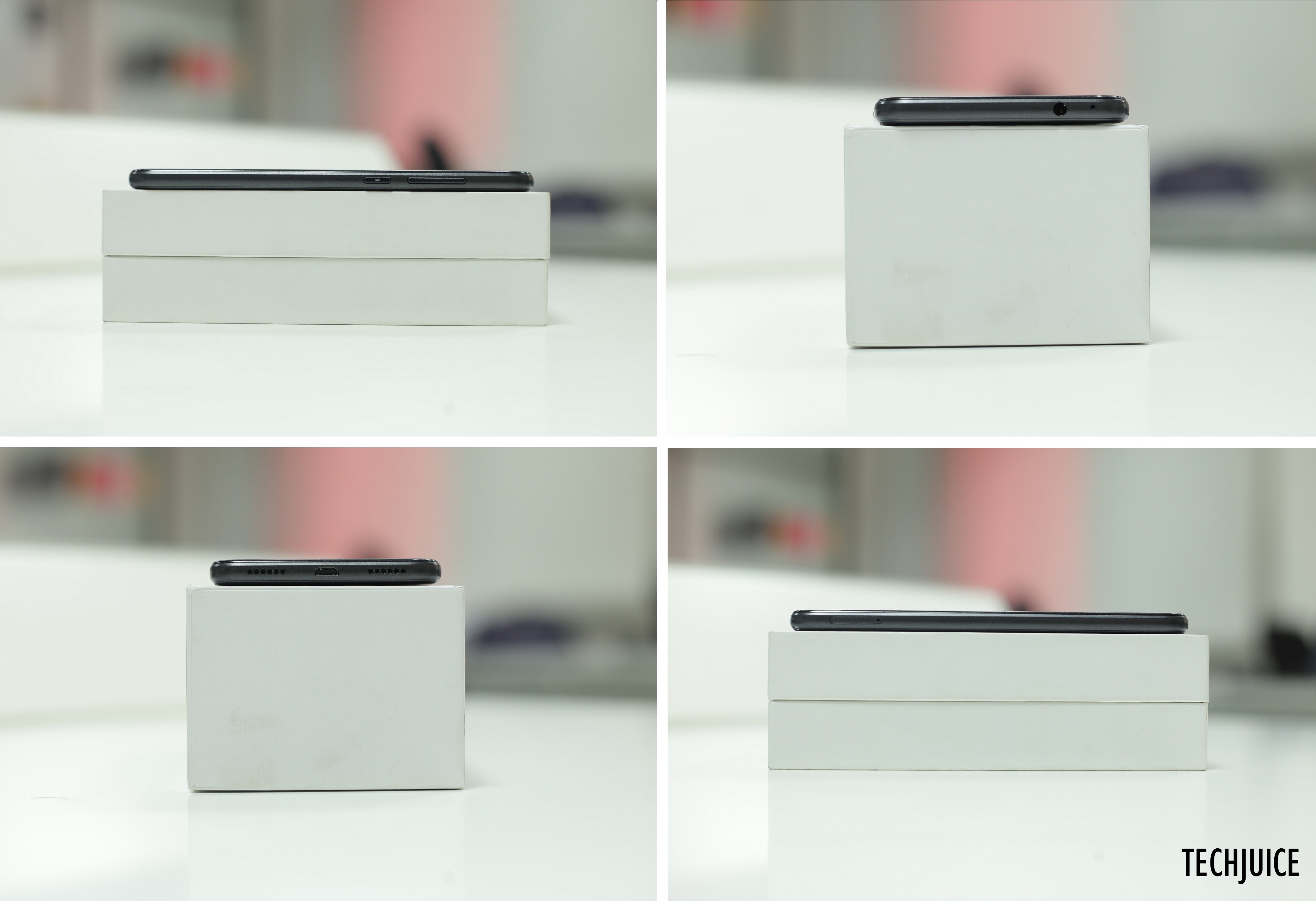 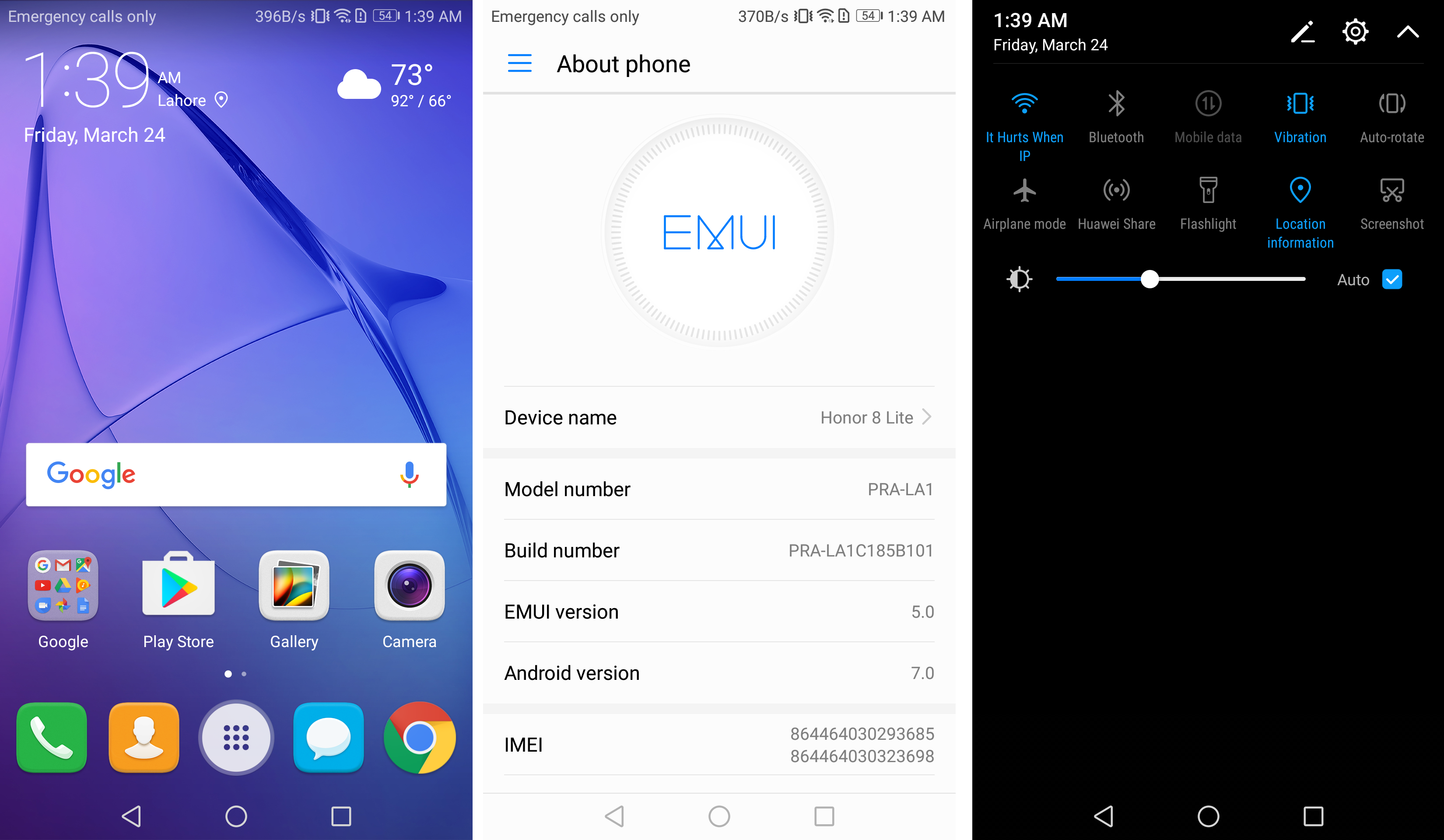 Honor 8 lite ships with the latest EMUI version 5.0. It is built on top of Android 7.0 nougat. There is a lot which has changed since the EMUI 4. Huawei is moving away from its one home screen to rule all thinking and has finally given users the option to enable an app drawer. The whole UI is also a little less reminiscent of Apple’s iOS this time and finally seems to be building its own identity.

Things aren’t all so bright and beautiful. At times, the software experience seems rough around the edges. It feels like the first version of a new software — a little buggy and a little blunt. A couple of crashes and some slowdowns here and there take a lot of points away when considering its user experience. It will get better with future updates so it is not that big of an issue, but it is definitely something to keep in mind while deciding about purchasing this phone. 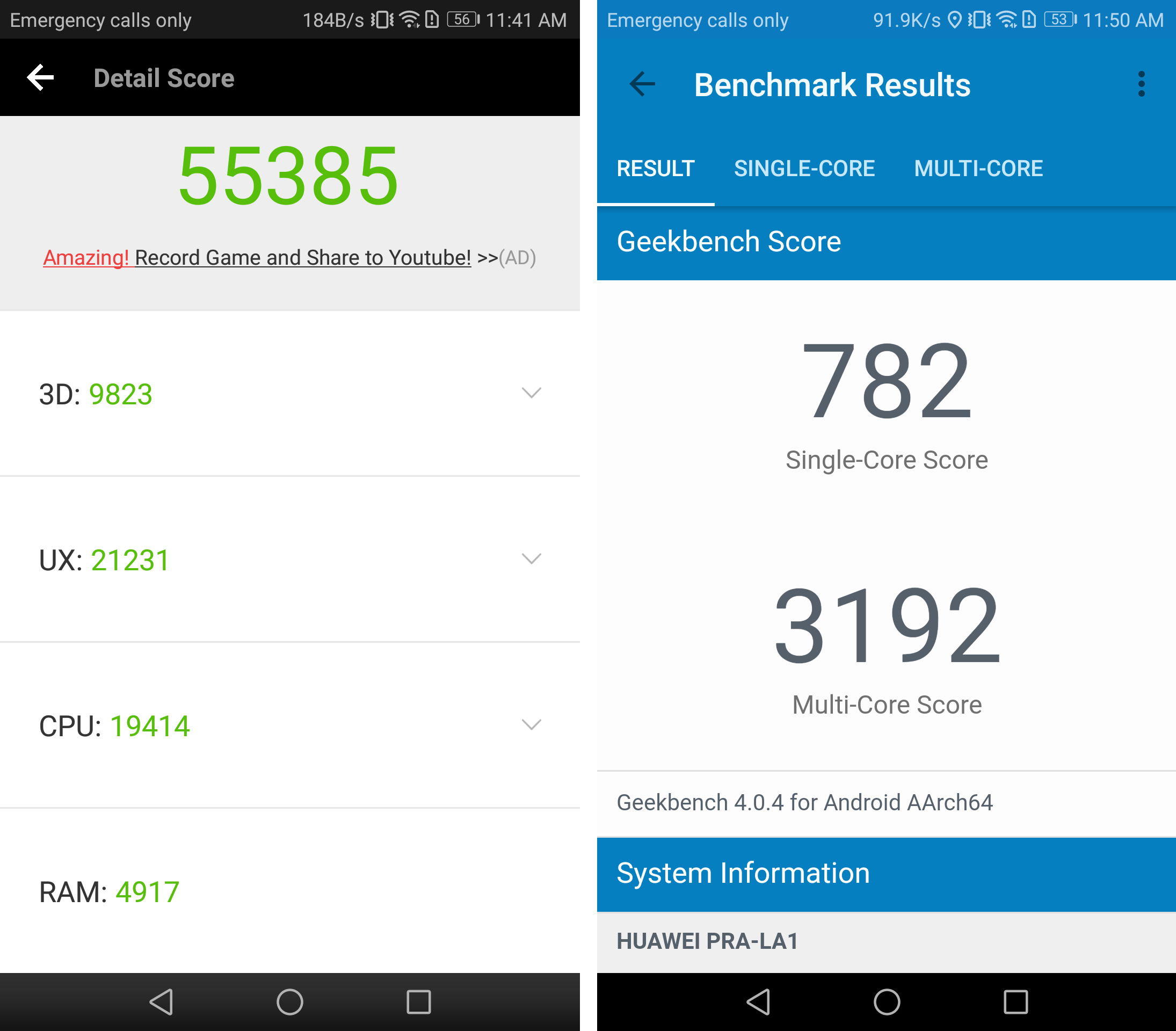 Huawei has used the same chipset in Honor 8 lite which was previously used in Honor 6X. Make no mistake, this chipset is no slouch when it comes to performance. Nearly all resource intensive applications work smoothly on this and playing 3D games is no issue at all. But, as I did mention before, there are some random hiccups and slowdowns while using the phone. I suspect the software to be the culprit in those cases rather than hardware. So there is a big chance that these small issues will be fixed in the future. I wouldn’t fixate too much on these issues as they few and far between.

The display area also has nothing for me to complain about. It’s a 1080p panel so sharpness and readability are not an issue. It also gets really bright which helps to view it in outdoor conditions. It gets two big thumbs up from my side.

With its 3000 mAh battery and a reasonable 1080p screen, the battery life is pretty good too. It will easily last a day and a half on moderate usage. The screen on time is within the range of 6-8 hours consistently. 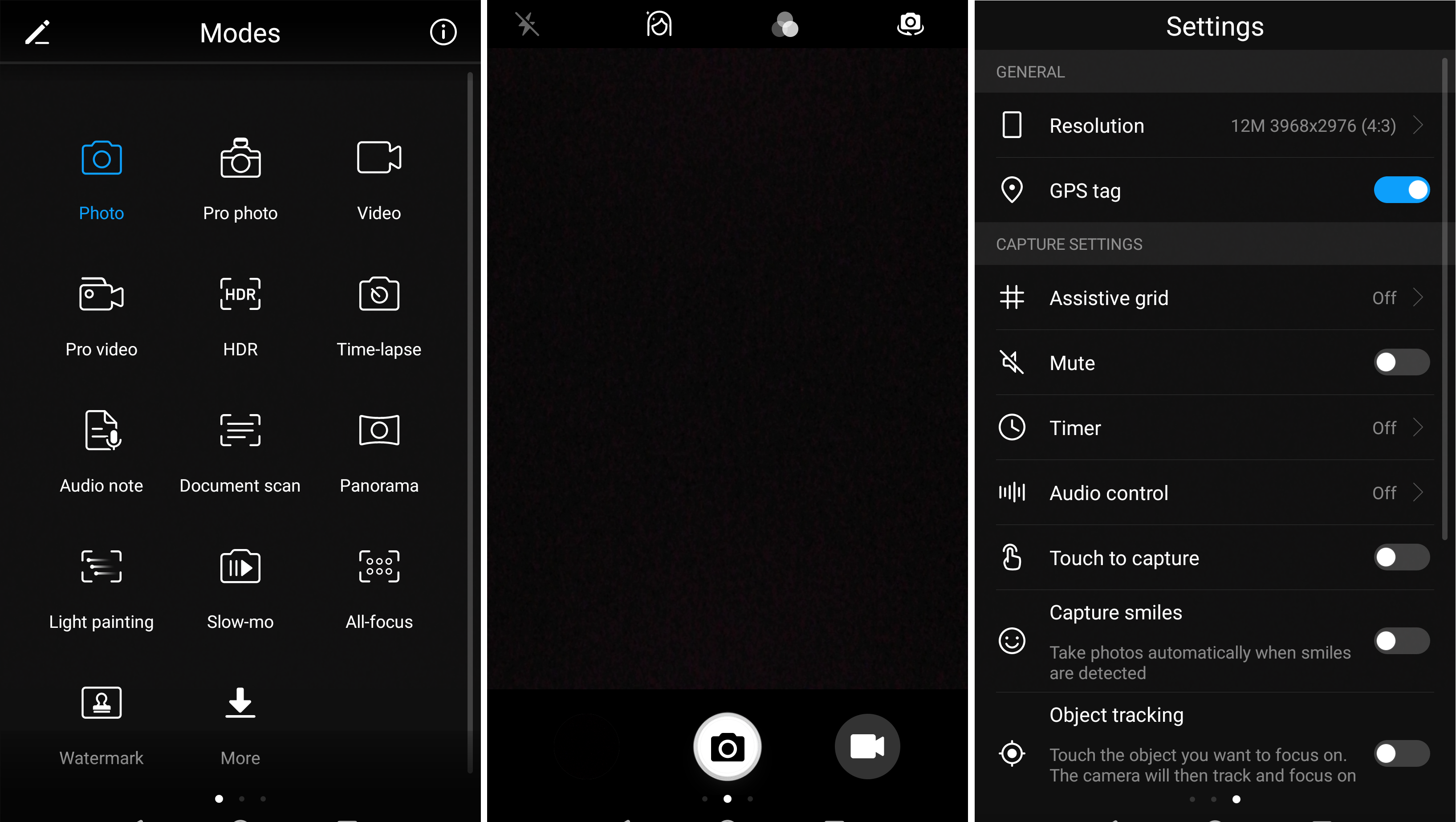 This is a part which disappointed me a little bit. Huawei used a dual camera setup in both Honor 8 and Honor 6X, former of which is about the same price as Honor 8 lite. Although those cameras didn’t work perfectly one hundred percent of the time, I did like the unique bokeh effect they produced. For some unknown reason (not cost apparently), Huawei decided to leave that out on this device.

The single sensor 12 MP camera isn’t bad, but it does falter a bit in comparison to Huawei’s own devices. Keeping that aside, it does take pictures with good color composition and lots of details in nicely lit areas. Shutter speed is also pretty impressive and you can take a lot of pictures at once with minimal to no waiting time.

The front camera is an 8MP wide angle camera and works perfectly well for a casual selfie or a group picture. The majority of the users should have no complaint whatsoever about Honor 8 lite’s camera. Here are some camera samples for you to see and decide for yourself.

Let’s tackle the million dollars (or in this case about 24,900 Rupees) question now. Should you choose to buy this phone amidst a plethora of other devices available in the market? It depends. If you want your smartphone to look shiny, cool and premium, Huawei Honor 8 lite is the phone to go for. It doesn’t disappoint in performance or battery life either. So it’s a pretty safe bet if you choose to invest in this phone. However, there are some other options within this price range which might be worth taking a look at. Huawei’s own Honor 6X provides a better camera in about the same price range.