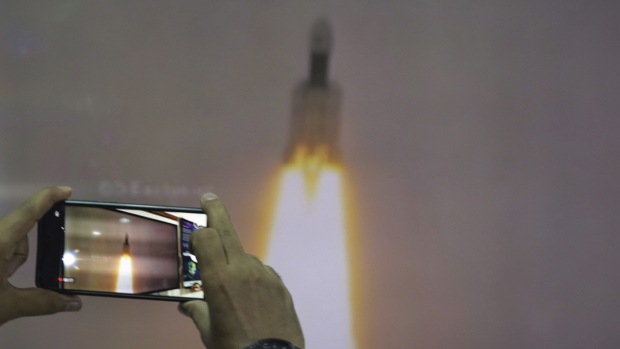 India has finally launched its second lunar — Chandaryaan-2 mission a week after it called off the scheduled lunar-mission due to a technical fault. It is worth mentioning here that India’s lunar mission, Chandrayaan-2, is being launched 11 years after Indian Space Research Organisation’s (ISRO) successful first lunar mission Chandrayaan-1

Interestingly, the geosynchronous satellite launch vehicle (GSLV-Mk0III-M1 rocket) lifted-off from the Satish Dhawan Space Centre, Sriharikota into cloudy skies in the afternoon and successfully placed the 3,850-kg Chandrayaan-2 into the earth orbit about 16 minutes later. The rocket is dubbed as India’s most powerful launcher to date.

The mission’s success brought in huge relief for ISRO scientists after the 15 July launch was called off just about an hour left following a technical glitch in the rocket. Last week’s decision is said to be right and in a timely manner because if the glitch would not have been spotted before launch, or else Chandrayaan-2 would have suffered the same fate as Israel’s Beresheet spacecraft and crashed right into the surface of the moon.

The INR 978 crore mission, that will mark a giant leap in India’s space research and make it only the fourth country to have landed a rover on Moon, was rescheduled to Monday after scientists corrected the technical glitch in the three-stage rocket.

It must be noted that this satellite launch is only the beginning of a 384,000km journey and ISRO is still hoping the lander will touch down on the Moon on 6 or 7 September as planned.

You can watch the launch of Chandrayaan 2 by GSLV MkIII-M1 Vehicle below.