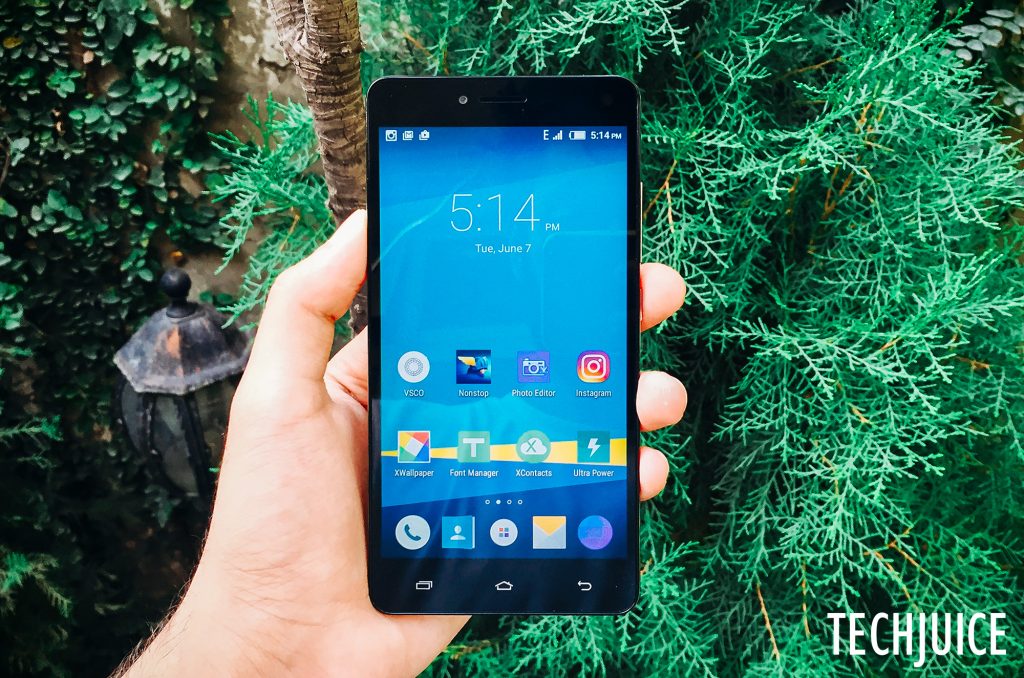 The Infinix Hot 3 definitely has a better-looking design than the boxlike Infinix Zero 3. It’s not something to get terribly excited about but it looks good without the addition of any gimmicky design features. It feels sturdy but light at the same time. The sound from the speaker was muffled by my hand from the start. The interface was snappy on first use but got much slower as time progressed, but more on that later. Without further ado, let’s take a look at the specifications.

The design of the Infinix Hot 3 differs from the previous Hot phones, which resembled the Zero series (and also the Sony Xperia series). It is constructed out of plastic but still manages to feel pretty sturdy. The plastic back has a rugged diagonal texture and the edges curve to meet the frame in the same way as the glass backs on the Samsung Galaxy S7 and Note 5. There are very slight chamfers on both sides of the frame.

The capacitive Home, Recent Apps and Back buttons occupy little space on the bottom bezel. The power button and volume rocker are located on the right side and are comfortably within reach. The headphone jack and the micro USB port are on the top. The camera and the single LED flash are located at the top right. The speaker grille is located at the bottom-right of the back which sounds being muffled most of the time by the palm.

The micro SIM and the micro SD card slots rest inside the back cover.

The device supports a 5.5-inch IPS LCD capacitive touchscreen with an HD resolution. The display has an unflattering pixel density of 260 ppi. There is also no screen protection, which means a tempered glass protector is necessary in order to keep the screen safe. Viewing angles are satisfactory but colors do seem a bit washed out.

The low pixel density does not suit the large display and details look pixelated if one pays close attention. However, for such a low-cost device, it does pretty well when watching videos and web browsing.

The Infinix Hot 3 runs on a 1.3 GHz Quad-core MediaTek processor which is supported by 1 GB RAM. The device performed better than expected. Although there were multiple cases of stutters in animation and significant lag when switching between apps, the device performed fairly well in day-to-day usage and did not overheat when used for long periods of time.

Storage was disappointing as the bloatware took up precious space. Out of 16 GB only 10.68 GB was available to the user. Additionally, the device allows memory expansion via microSD card to only 32 GB which is odd since most phones nowadays offer support for 128 GB microSD cards. 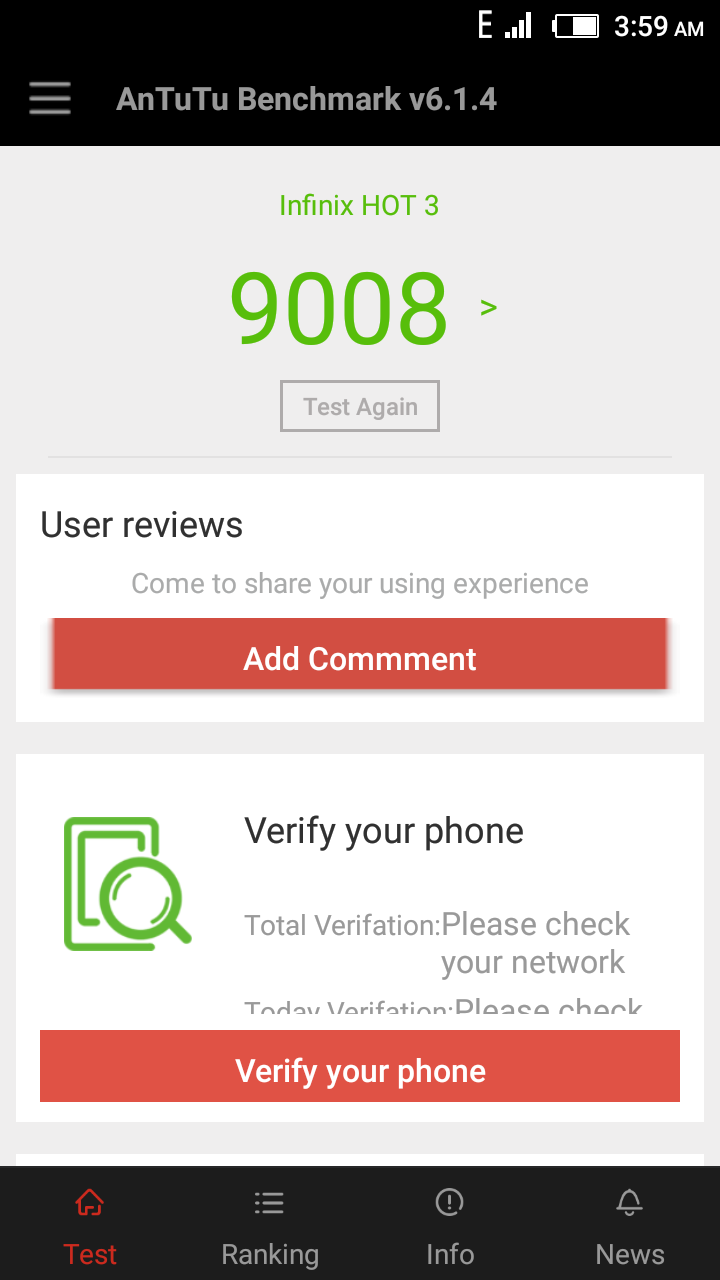 A removable 3000 mAh battery powers the smartphone. Battery life was one of the strong points of the device, which was surprising considering the large 5.5-inch display. The device had no trouble lasting over a day on normal usage. Enabling a 3G internet connection did put quite a drain on the battery but that is to be expected. 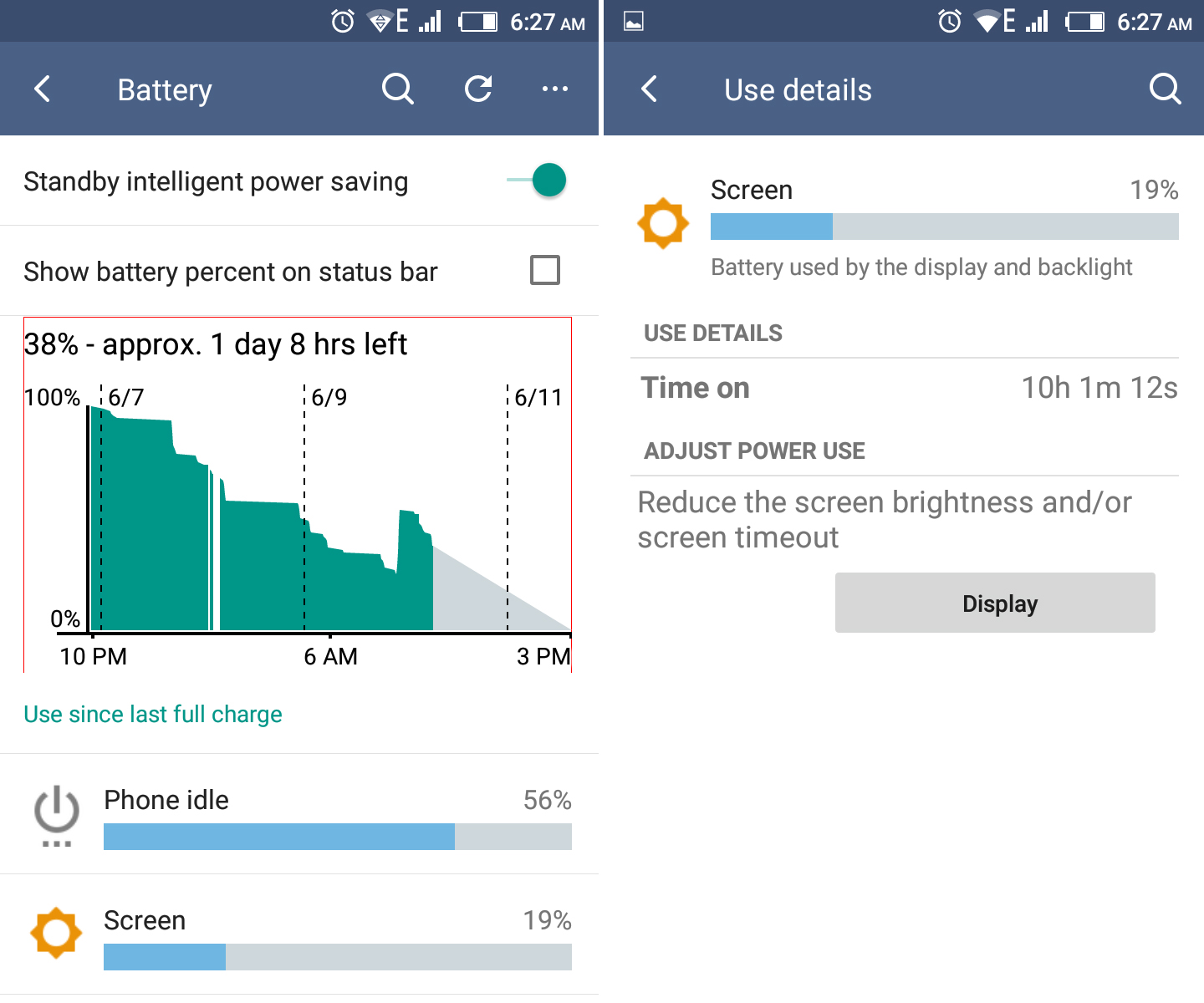 For an even better battery life, an Ultra-power saving mode is present. It is accessible right from the expanded notification bar.

The Hot 3 certainly beats the other budget phones in this price range with its 8 MP rear camera, where most other devices have 5 MP shooters in this range. There are settings to control ISO and exposure, an HDR mode, the option to set volume buttons to take photos or zoom in/out and also an option for taking burst shots.

The quality of the photos was not too bad either. There were some fringing and destructive post-processing present in the images but overall, the camera performed pretty well in good light. Colors were vibrant, details were well-kept and the auto focus did not take too long to lock on to the subject. But the camera failed to perform in low light. There was too much noise reduction which resulted in photos that were not sharp or detailed and the auto focus failed to perform altogether.

The front camera had a similar case. Selfies turned out quite well in good light but the images were grainy in low light.

There was an issue with the camera app that it had a jittery live-preview and there was also very noticeable shutter lag when taking photos. This could be attributed to the software.

The Infinix Hot 3 features Android 5.1 skinned with the latest version of X UI. It looks like a mixture of stock Android and the LG UI with big vibrant icons and design elements. The skin does affect the performance of the device in a negative way sometimes. The UI stutters and seems to put a strain on the processor.

The Infinix Hot 3 is a budget device and a fairly good one at that. For a device below Rs. 10,000*, there’s a lot to like about it if you ignore the jittery UI and the limited storage.

The parts I did like were the build quality and the battery life. Oddly enough, even though the comparatively expensive Infinix Zero 3 is supposed to be the superior device, the Hot 3 actually has a better build. The design isn’t tacky or gimmicky. It’s functional and ergonomic. The 5.5-inch screen feels comfortable to use due to the small bezels and that slightly curved back. The battery easily lasted me more than a day in normal usage. The HD resolution display also complements the large battery and results in more screen-on time in comparison to devices that have a combination of a Full HD display with a 3000 mAh battery.

What I did not like was the performance. The user interface was slow and apps sometimes took a relatively longer time to launch. I attribute this mediocre performance to X UI and it’s supposed “enhancements”. At some points, the phone even force-rebooted on me. Especially after using Antutu Benchmark.

Overall, I think we can say that budget phones have come a long way. My first budget device was the HTC Wildfire S. If we compare the two, the Infinix Hot 3 obliterates the Wildfire S in almost every aspect. Especially pricing (the Wildfire S cost me Rs. 15,000). You really begin to appreciate budget devices when you stop comparing them to mid-range or flagship devices. The Infinix Hot 3 isn’t meant to pack a punch. It’s meant to be functional while also being easy on your wallet and it’s doing a pretty good job at that. 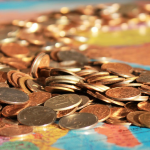