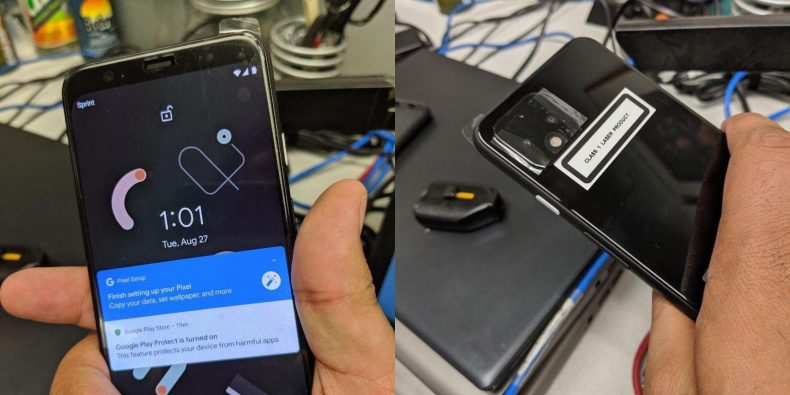 Google’s upcoming flagship smartphone appears to be its most alluring one yet. While we have already caught a glimpse of the Pixel 4/4 XL courtesy of renders earlier this month, a set of recent leaks gives us our first detailed look at both the front and rear of the device.

Initially discovered on the messaging platform Telegram, the two images showcasing the front and back were eventually shared to Twitter, where they got greater public exposure. To start with, we see that the 5.7-inch display hosted by the device has a pretty thin bezel at the bottom, and despite the considerable number of sensors packed at the top, that area is fairly bezel-less too.

Unfortunately, the face unlock camera or the motion-sensing Soli radar chip are not really visible in the image, so we’ll just have to wait for the actual reveal to experience those bits of technology. Additionally, a speaker grill resembling the one found in the Pixel 3 can be observed in the middle, except for this one is narrower and slightly taller.

The Assistant handles and the design of the navigation bar on the screen indicates that the device will be running Android 10. Other features that stand out include notifications for Pixel Setup and the Play Store, which is admittedly not unexpected.

Moving on to the snapshot of the rear, there is quite a lot to see here primarily in terms of the camera technology. For starters, a particularly massive camera setup covered by a film is visible at the top-left corner. The 12MP lens with phase-detect auto-focus and the 16MP telephoto lens stand out from the setup. Owing to its considerable size, the flash sensor is immediately visible within the arrangement.

The rear image provides other views as well, including its shiny surface, the aesthetically pleasing curved edge, and the power button and volume rocker.