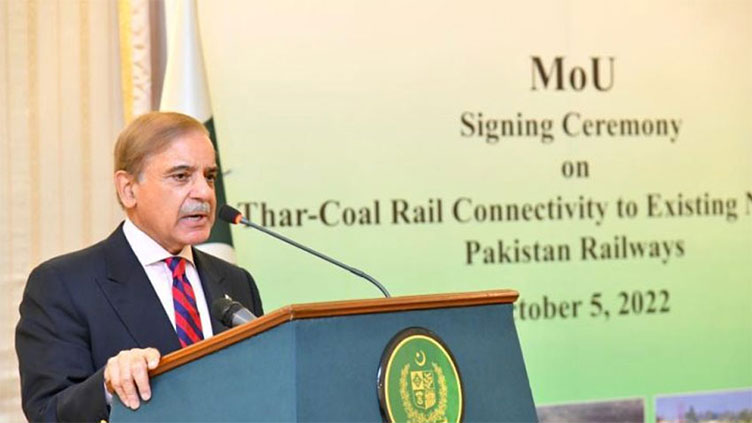 Prime Minister Shehbaz Sharif chaired a meeting on Wednesday which was joined by Federal and Sindh government officials and it was decided that the Thar Coal Mines will be linked with Rail Network and this project will be executed by the Federal and Sindh governments. Prime Minister directed the concerned authorities to complete this linking project by March 2023. Prime Minister Shehbaz and Sindh Chief Minister Syed Murad Ali Shah would also sign a Memorandum of Understanding soon. PM is linking Thar Coal And Railway, and during his speech at the ceremony he said;

Federal ministers Ishaq Dar, Ahsan Iqbal, Khurram Dastgir, special assistants to PM Jahanzeb Khan, Zafaruddin Mahmood, and senior officers attended the meeting. The members were briefed on the situation of linking Thar Coal Mines with the rail network, the local coal would be utilized not only by the power plants of Jamshoro and Port Qasim but also by other power plants and industries in the country.

Meanwhile, Prime Minister Shehbaz Sharif warned that climate change would not spare other countries after the flash floods inundated one-third of Pakistan and left millions of people homeless. “What happened in Pakistan will not stay in Pakistan,” he said in a tweet reiterating his call for urgent action a day after the United Nations issued a revised flash appeal of $816 million as relief assistance for the flood-stricken people of the country.

More than 1600 Pakistanis–including 400 children–have lost their lives. 1000s of KMs of road infrastructure & bridges are washed away. Entire villages have been swallowed up by raging waters. Nature has been truly unforgiving. https://t.co/btzmtIRhYs

PM Shehbaz Sharif in his tweet highlighted that more than 1,600 Pakistanis including 400 children had lost their lives due to massive floods besides thousands of kilometers of road infrastructure and bridges washed away. “Entire villages have been swallowed up by raging water. Nature has been truly unforgiving,”

Meanwhile, Prime Minister Shehbaz Sharif’s promise to construct 100 homes under the Flood Relief Village in Tank district, Khyber Pakhtunkhwa, was fulfilled after the construction task was completed in a record period of time.

The construction process was completed on October 5 in record 24 days. The prominent architect of the country, Ali Naqvi, designed the housing units. The prime minister thanked Chief Executive Officer (CEO) of Menzies Global Aviation Philipp Joeinig, who called on him, for the construction of a flood relief village, the PM Office Media Wing said in a press release. He termed the construction of 100 housing units a vital step in the rehabilitation of flood-affected families.

The government claims that these housing units are equipped with the facilities of a solar system, school, clinic, and tube-well. The units are made of the latest construction material and technology, which can resist extreme weather conditions. The school has the facility of computers and other latest facilities whereas the clinic will provide health and treatment facilities to the local population. A Solar-Powered Electric Car Removes Carbon from the Air