TechJuice > Education > Malala partners with Apple to get 100,000 needy girls into education

Malala partners with Apple to get 100,000 needy girls into education 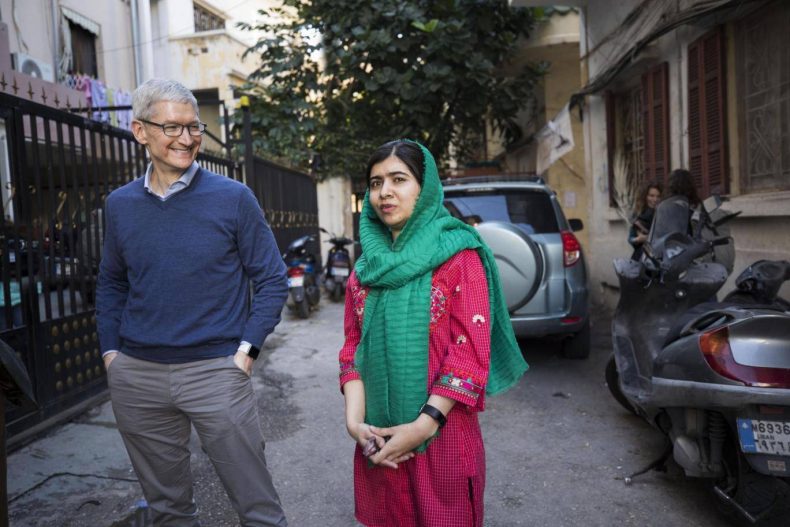 Malala Yousafzai has become the face of education for girls across the world because of her ongoing efforts to empower girls. She has developed a charity organization Malala Fund to raise voice for the right of education of women. The world’s youngest Nobel Peace Prize winner Malala has recently met with Tim Cook, CEO of one of the biggest companies in the world, Apple, on Saturday, and announced a partnership of Malala Fund and Apple to get at least 100,000 underprivileged girls into education.

This groundbreaking partnership has been announced in an exclusive interview with The Independent, where Apple CEO has agreed to offer considerable funding and resources to the Malala Fund to help the charity to achieve its goal of delivering education to girls in countries like Pakistan, Afghanistan, Lebanon, Turkey, and Nigeria. While announcing this partnership alongside Cook in Beirut, Lebanon, Malala said,

“I really wanted us to work together because Apple has expertise: they are expert in tech, they have resources and they have amazing and incredible people. Many of the champions who are supporting [the girls] are using technology and finding new ways to make it easier for girls to have access to education, whether it’s e-learning or getting STEM [science, technology, engineering, and maths] skills. So, I’m just really hopeful that we can reach as many young girls and as many young advocates as possible.”

Apple and Malala Fund, both have been discussing the possibilities of partnership when Malala and Cook met at Oxford University back in October last year and discussed how technology could help get more needy girls into education. Tim Cook said that Apple’s expertise in tech “could bring a lot in support of Malala’s vision”.

Gender inequality in developing countries like Pakistan, Afghanistan, and Lebanon has been one of the widely faced problems. While steps like these will be very helpful in providing girls quality education in good institutes and environment same as boys.