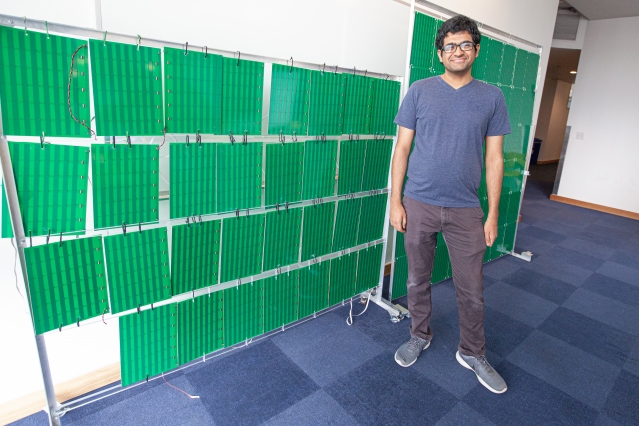 5G is being touted as the most revolutionary technology of the last 10 years, however, it doesn’t come without its limitations. One of those limitations involves the higher frequency radio waves 5G uses to produce its high speeds. These waves have a relatively small range that they can travel without becoming too weak. The general solution for this problem is to add more antennas to the transmitters and receivers at each end of the system, but that can be costly and inefficient. However, it seems MIT has developed a novel solution to this problem in the form of its new ‘smart surface’.

RFocus is the ‘smart surface’ in question, and it was developed by researchers at MIT’s Computer Science and Artificial Intelligence Laboratory (CSAIL). It uses more than 3,000 software-controlled antennas that serve to amplify the signal hitting them by a factor of 10. Each antenna costs only a few cents, or rupees, due to its extremely simple function. Instead of processing the signal, which requires more advanced hardware, the antenna simply controls how it is reflected.

The system is very similarly to a lens or mirror in its operation, in that it focuses the signal in a certain direction or distributes it in many different directions respectively according to how it is set up. The system is also incredibly power effective, because it merely reflects the signal instead of retransmitting it.

“If you want to have wireless devices that transmit at the lowest possible power, but give you a good signal, this seems to be one extremely promising way to do it,” said MIT Professor Hari Balakrishnan, a senior author on a new paper about RFocus.

There’s no news about when we can expect such a system to come to market yet, but it shouldn’t be too difficult to implement in the real world. We might start seeing it soon as “inexpensive thin ‘wallpaper'”, or in IoT devices as 5G becomes increasing popular.