MIT Robotic Cheetah can jump over hurdles & it looks terrifying

MIT Robotics Engineers have developed a battery-powered four-legged robot cheetah which is capable of running as fast as a human being with the ability to jump over hurdles – autonomously. The team took five years to design the artificial intelligence for the robot with funding from Defense Advanced Research Projects Agency (DARPA).

MIT researchers released a video showing the quadrupled cheetah clearing obstacles up to 18 inches while running at an average speed of 5mph. The robot cheetah use three basic algorithms for jumping over the hurdles; it estimates the height, size and distance of objects in its path, adjusts its position to prepare a jump and then, lands safely without slowing down. The cheetah-bot, with its 12 electric motors and 3D-printed legs, uses LIDAR sensor system to see the obstacle and maps the terrain using reflections from lasers. You can watch the video here.

Team Leader Sanbae Kim said, “It’s the first legged robot that can leap hurdles like this autonomously. Many other robots can move faster on wheels, or maybe jump higher, but they can’t do it on their own.”

The MIT team will give a live demo at the DARPA Robotics Challenge Finals in June and present the findings from its latest round of tests at a robotics conference in July. 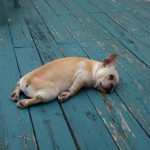