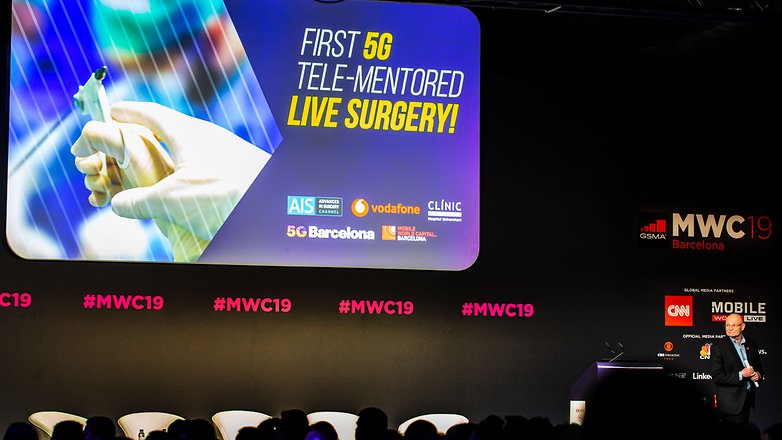 At the global MWC event which is taking place at Barcelona, doctors have performed the World’s first remote surgery with the 5G technology.

As the communication technologies continue to evolve, a team of doctors was able to use the 5G technology to perform a tumor-removal surgery. While the surgery was being performed, the direction came from a senior head of department doctor who was at Mobile World Congress, a venue five kilometers away from the operation theater.

Hospital Clinic, a hospital in Barcelona, had partnered with Vodafone to have access to the fast 5G technology which linked the operation theater with one of the auditoriums at the MWC.

Antonio de Lacy, the Head of Gastrointestinal Surgery Department, and his team performed the surgery live and removed the cancerous tumor from the colon of the patient. The next-generation 5G mode of telecommunication enabled the doctors to have access to high quality of visual data at a much faster transfer rate, overcoming the intricacies of the operation. The teleoperation is being called as one of the first steps to the advent of remote surgeries.

“If you are going to do remote assisted surgery, you need to be almost there in person. You cannot have more than a couple of milliseconds latency. And that is where 5G technology comes in,” GSMA director general Mats Granryd said. Every year, many surgeries are not performed only because an expert is not available in person.

5G technology is already knocking the door and we might be able to see this technology just in a matter of a few years. Samsung just unveiled its first 5G smartphone and the technology was also the hot topic at the more recent MWC event. Once available, the 5G technology will find its applications in bandwidth-intensive usages like complex medical use cases and pave way for applications like cloud quantum computing.