The Indus Entrepreneurs (TiE) is the world’s largest non-for-profit network of established and aspiring entrepreneurs. The Lahore chapter of TiE has elected new leadership in accordance with its bylaws after an Annual General Meeting. The elected officers for TiE Lahore chapter are

“It is indeed an honor to be elected President of the TiE Lahore Chapter. TiE has a strong foundation and we now have the opportunity to grow it further. I am looking forward to working with this great team to make TiE become a powerful enabler for igniting this force of entrepreneurship in Pakistan. Entrepreneurship will be the driving force to make Pakistan a more prosperous and progressive country.” 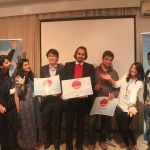