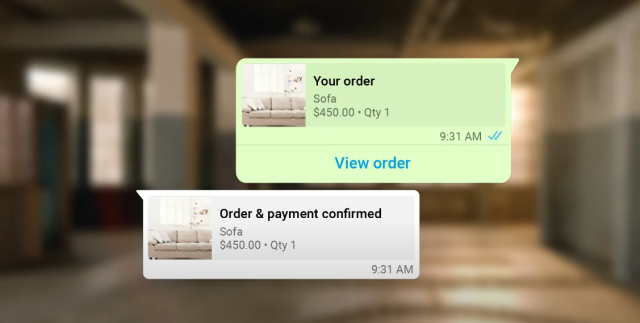 Facebook clearly wants you to be able to shop no matter which of its apps you’re using. Following on the heels of Messenger and Instagram, WhatsApp has confirmed that it will be expanding its in-app shopping features to give users more ways to interact with businesses and be able to place orders directly on chats.

While the company’s statement doesn’t give much away, the promo video it shared on Twitter gives us an idea of how transactions might take place. A user simply messages a business, which in turn responds with a link to a product, and the user can keep refining their query and add items to their cart until they decide to checkout from the app.

WhatsApp has previously had a catalog feature, but it was pretty limited in its scope. Now though, the app is basically giving you a proper shopping experience, the kind you might have become used to when using Messenger to place an order for pizza or for that colorful tunic.

And of course, this update ties in neatly with Facebook’s ambitions to push shopping features across its suite of apps. In fact, its recent launch of Facebook Shops, which allows businesses to create product catalogs that can be presented to users across Facebook and Instagram, further consolidates the social media giant’s plans for shopping domination.

“We want to make shopping easier for people and empower anyone, to use our apps to connect with customers and grow their business,” Facebook said in a statement. “That’s why we’re creating new ways for people to shop on our apps and providing tools to help businesses sell online.”

All transactions on WhatsApp are expected to use Facebook Pay, which the company began testing in Brazil earlier this year.

previous
5 of the best laptops you can get in Pakistan under Rs. 50,000 in 2020
random
next
AV receivers for PS5 and Xbox Series X reportedly hit by major HDMI bug
Trending Posts