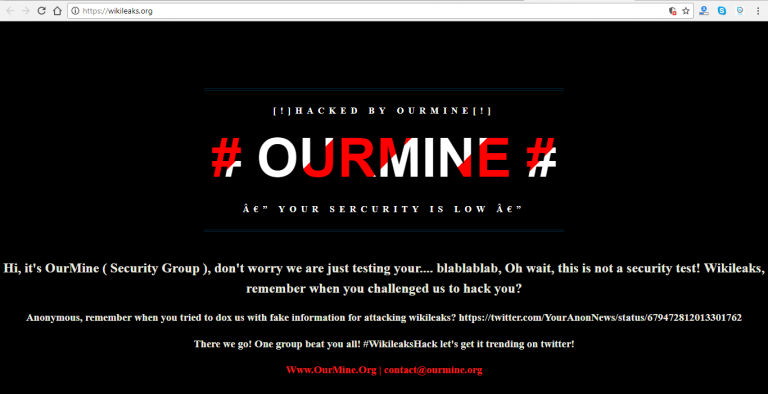 Ourmine’s new target is none other than Julian Assange’s Wikileaks and at the time of writing, the website is back up but a number of users managed to take a screenshot which you can see above. Wikileaks was apparently taunting the wrong group of people!

Ourmine isn’t new to the hacking game. The security firm wants organizations to hire its services to enhance their privacy and make their platforms more secure. It promotes its services by hacking high profile accounts such as celebrities or brands and puts through message asking the account owner to purchase their services.

Recently they had taken down FC Barcelona and Real Madrid social network accounts. Before that, they took down accounts of Twitter CEO Jack Dorsey as well as Google CEO Sundar Pichai’s Quora account and more. Wikileaks website was the latest prey and it was offline for most of the day, only coming back online as I was compiling this article.

The message on the website was: “Anonymous, remember when you tried to dox us with fake information for attacking wikileaks? https://twitter.com/YourAnonNews/status/679472812013301762.”

Apparently, they were trying to prove to Anonymous that when they hack someone, they let the world know. No need to keep it hidden. The managed to take down the website through “DNS poisoning,” they fooled the servers hosting the website to redirect to another server hosted by Ourmine. According to the Guardian, it is unlikely that Wikileaks’ own servers were compromised because of this hack.

Only God knows who else Ourmine will be targeting. Till then remember to keep your passwords strong just in case and always use 2-step authentication.