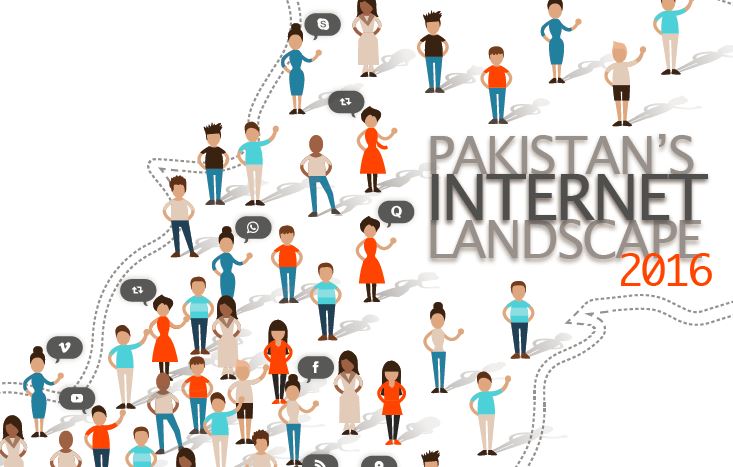 Pakistan is at the edge of a digital transformation. While the state of Internet penetration appears to have bettered, as compared to a few years ago, Pakistan is not picking up pace fast enough to catch up with the rest of the world. Internet censorship, monitoring of Internet activity and draconian laws like the recently approved Cyber Crimes Bill aren’t really helping boost the situation positively.

Bytes For All, a human rights organization, has recently published their annual report “Pakistan’s Internet Landscape 2016” that highlights the decline in online rights for citizens and how the government is infringing upon our liberties in order to fight cyber terrorism.

“Numerous positive developments that have been actualized in the online space are negated by the laws and policies being set in place. By this time next year, the progress that has been achieved will likely have regressed, with citizens and the very individuals who signed off on such policies left vulnerable to the abuse of power being granted in the regulation of the Internet.”

While the full document is available online, here are some key points discussed in the report:

Pakistan’s Internet Penetration has considerably increased over the last two years, mostly owing to the introduction of 3G/4G. As of February 2016, Pakistan has 26.19 million mobile internet users, while as of January 2016, there are 29.32 million broadband subscribers. Despite an increase in these numbers Pakistan still happens to one of the 5 least connected countries in the world and the digital divide is still persistent. A person’s internet connectivity is strongly determined by whether an individual lives in an urban or rural area, age, education, income, owning a smartphone.

According to The Freedom of the Internet 2015 report published annually by Freedom House, Pakistan has been given the lowest status of ‘Not Free’ due to consistent online censorship. Over the years the PTA has blocked various websites, the most prominent one being YouTube. Just last month, in a Senate meeting PTA was given the supreme authority to become the sole governor of Internet in Pakistan.

Over the last two years, there has been a greater understanding between social media giants like Facebook, Twitter, YouTube and the government. According to the report, these social media groups have been complying with the government when it comes to blocking certain content or giving up a users information.

Over the last year we have seen several cases of blasphemy reported on social media which result in hate mongering and unpleasant incidents. The report predicts that blasphemy-related censorship is expected to increase in the coming months.

The report mentions that a Privacy International report uncovered that the government cybersecurity surveillance tools from multiple international companies that enable high-level spying. According to the same report, massive surveillance has been ongoing since 2005 and a leak of emails from an Italian security firm, Hacking Team, established that Pakistani contractors had been working to procure invasive online spying tools.

The Prevention of Electronic Crimes Bill (PECB) is all set to become a Law and people are not exactly overjoyed. Essentially, the Bill will criminalize whistleblowing, use of VPNs for encrypted browsing, and blocking of any content the government deems inappropriate. Under this law, acts of cyber terrorism, hate speech, fraud, hacking, and the distribution of pornographic material over the internet would be punishable acts. The punishments proposed in the bill include 14 years of jail for cyber-terrorism.

Critics are worried that the state might use this Bill to cripple citizens.

Protection of Pakistan Act (PPA) 2014 is now a Law and can be used to justify almost any act of the state. This Act is almost as controversial as the PECB.

The Pakistan’s Internet Landscape report alleges that the state has strengthened its relationship with Facebook and is using it to gain access to private data of millions of Pakistani’s who are active there. And worst part is, while these acts are a violation of our civil rights, they have been legitimized in the draconian laws like PPA and the new PECB all in the name of countering cyber terrorism.