The federal cabinet has approved the appointment of Tariq Malik as National Database and Registration Authority (NADRA) chairman. He is currently serving at the United Nations Development Programme (UNDP), which had selected him from amongst 178 IT experts from across the world.

In his previous term as the NADRA chairman, Malik had affirmed that the then opposition’s demands to verify the 2013 elections results were fair and that it was possible to adhere to it through thumb impression verification via the biometric system. Consequently, he was terminated from service by the then PPML (N) government and had resigned a month later due to extreme pressure and threats of kidnapping made to his family.

Apart from UNDP, Mr. Malik has held the position of a senior technical consultant at World Bank and was a member of the core team that helped initiate the worldwide ‘ID for Development’ program and authored the framework of international standards for digital identity.

Malik is among the 10 core members of the World Bank’s Technical Experts Group (TEG), supporting client countries with ID planning and implementation. In addition, a European think tank, Apolitical, ranked him among the World’s 100 Most Influential People in ‘Digital Government.’

Read More: NADRA should be given another responsibility. 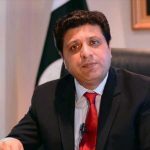