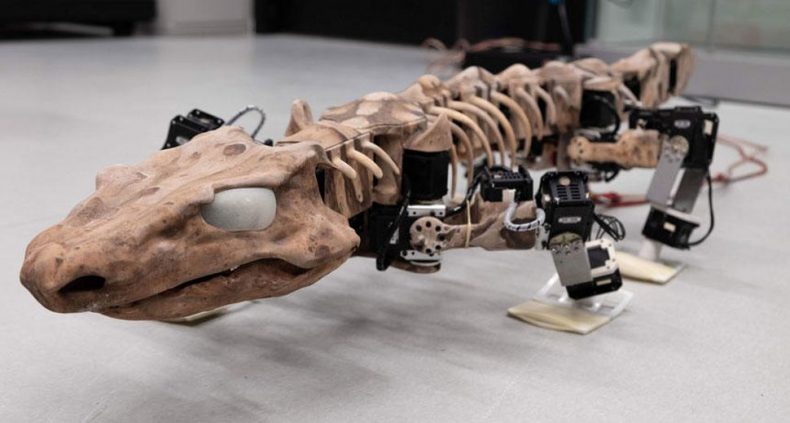 A group of researchers has made a lizard-like robot from a 280-million year fossil of Orobates pabsti which used to exist in Germany around 260 to 280 million years ago. The team used computer modeling to track how the creature used to move and through a rhythmic pattern, they were able to replicate the movement on a real-world model.

The research team had access to a full 4 legged skeleton so that they could physically examine it plus they also had ancient fossilized footprints which they fed to a computer program to draw out a simulation of how the amphibian used to move. Take a look at a demonstration below:

They didn’t just stop at simulations, they built a 4-foot long OroBot that can perform the same movements as in the simulations. By using 28 motors and 3D printed parts, they brought back Orobates pabsti to the land of the living:

The research abstract particularly noted that be simulating and presenting the movement of the Orobates, they have concluded that it possesses more advanced movements than earlier predictions which said that it might drag its body across the ground like a salamander. As you can see above though, the amphibian is perfectly capable of walking on its legs.

If you are interested in buying and reading their research paper, just go here. More demos are available on their university website if you want to examine them further as well.