Coke Studio has become a name synonymous with Pakistan’s music culture and has been appreciated all over Pakistan for its live-studio recorded musical performances by stars and even superstars. Now, Anwar Maqsood has revealed that Coke Studio has become so popular that even officials at Google were surprised at the show’s immense success.

The last two seasons of Coke Studio have been produced by Strings, the band duo of Bilal Maqsood, son of the iconic screenwriter Anwar Maqsood, and Faisal Kapadia, and they have taken the show to new legendary heights, the kind of which almost no Pakistani show has ever reached. Recently, Anwar Maqsood gave an interview to the Express Tribune about his impending retirement, letting loose some really interesting details about the show’s performance and the resulting interaction with officials from the search giant, Google.

“Officials from Google recently came to meet the Coke Studio team. They were surprised how a show originating from a country where YouTube is blocked went so viral that it has 72 million downloads and is watched in 120 countries,” said Anwar Maqsood.

To put that 72 Million figure in perspective, the whole population of our country is bordering on 200 Million. This is an immense feat, and social media has played a huge role in this achievement, especially with the eighth season that came out this year. The show started its 7 episode run with Atif Aslam’s Tajdar-e-Haram, a tribute to the original Qawwali by the Sabri brothers, and that video turned out to be a mega hit. As of yet, that video alone has received around 660,000 likes and nearly half a million shares; the very definition of being viral in this country. On YouTube too, the video has over 10 Million views!

Coke Studio is present in different countries around the globe, but here’s a screenshot of the frequency and the number of times “Coke Studio Pakistan” was searched on Google over the years. In 2015, it nearly tripled, showing the immense rise of the Pakistani musical show. 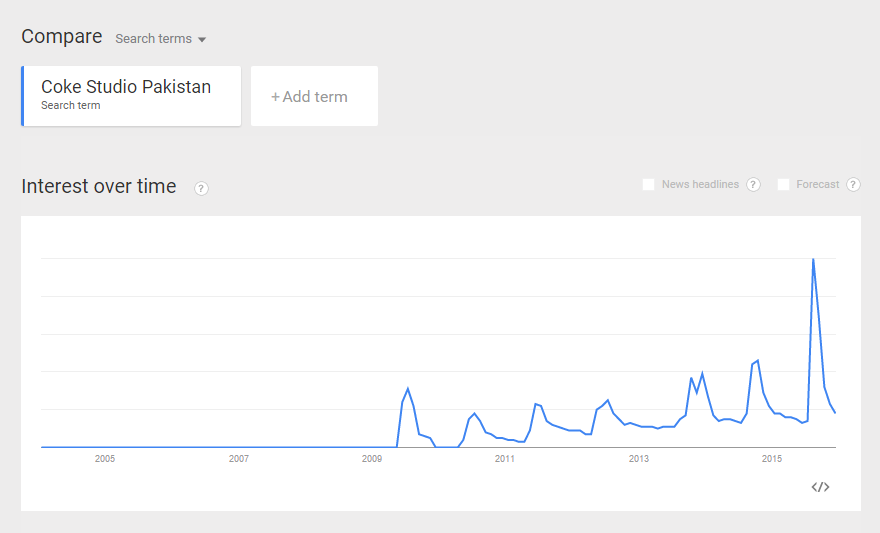 Each year, the Coke-sponsored musical show keeps getting better and better, pulling in even bigger stars. However, this year was a milestone with performances from Atif Aslam, Ali Zafar, Quratulain Baloch, Ali Azmat and even Arif Lohar, and it would be really hard to remain true to the expectations that were set by the Eighth season, but for that, we’ll have to wait for the Ninth season.