A Pakistani team made its mark in the Beijing robotics competition 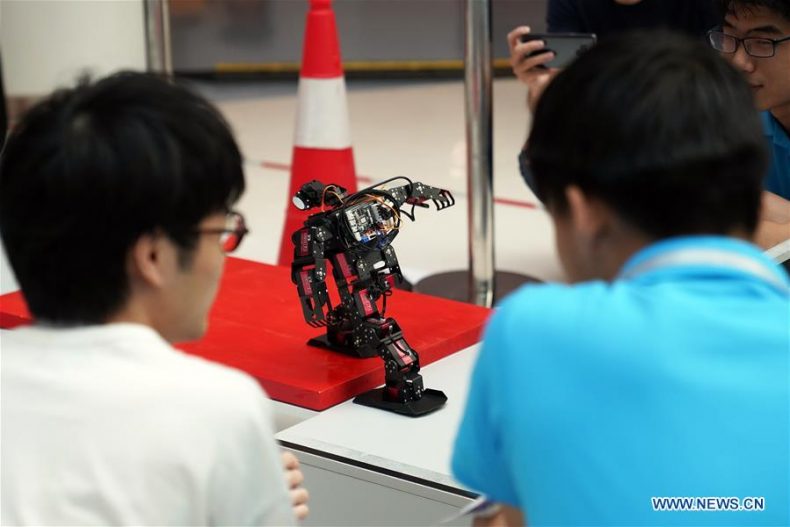 Pakistan may be well behind many other countries in terms of progress in automation and robotics, but the zeal and passion of our budding innovators is unparalleled, be it in the form of a wall-painting robot or in the form of machines that can deal with disasters. When it comes to putting our best foot forward on the international stage, we certainly don’t hesitate, and that’s exactly what an energetic team of robotics did in the capital of China.

Pakistan is one of 33 teams that competed in the first edition of the International Competition for Autonomous Running Intelligent Robots held in the Beijing Science Center over the weekend. Like most conventional events which involve either assessing a robot’s individual abilities or pitting it against another robot, this competition aimed to determine the ingenuity, creativity and flair that has been brought to the table by each team.

Essentially, it was a field task competition where each team had to guide its robot to perform in nine challenging tasks, such as crossing obstacles, kicking objects and getting by a crossbar on a fixed track. The entire competition was divided into two systems: challenges (standard) and advancement (free). Additionally, a robotic function exhibition took place to showcase some truly impressive work of engineering.

The strategy for enabling the robots to execute each task and subsequently succeed in them was devised by the team itself. Furthermore, the algorithm that was to power the robot was designed by the team as well therefore coming up with an optimal software program was as crucial as working on the hardware.

Ultimately, it was a team of four students from the Tsinghua University in China and the University of Lincoln in England which ended up bagging the first prize, including a massive $10,000 cash award. The Pakistani team reportedly managed to hold its own against the other teams from various universities around the world, and that is laudable indeed.

The competition, naturally, will play an important role in promoting interest in the field of robotics. In this regard, professor Wang Zhihua at the Institute of Microelectronics at Tsinghua University said: “Through this competition, we hope to promote the integrated development of chip and robotics-related technologies while encouraging young people to study artificial intelligence, robotics controls and chip design.”