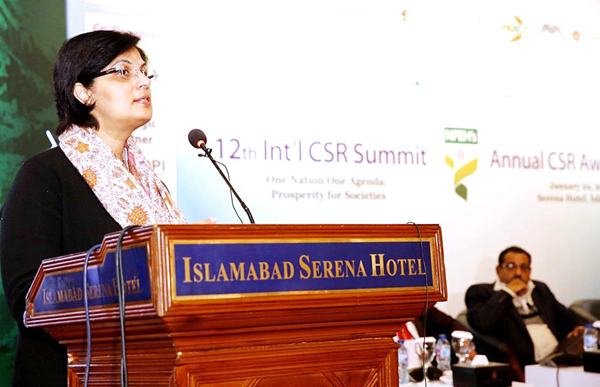 The advisory of Imran Khan for social protection and poverty alleviation Dr. Sania Nishtar said that the Government of Pakistan is going to launch an institutional arrangement in the next three months. The initiative would permit private and corporate sectors to connect with the Ehsaas program. The special system is going to make sure that the donations are submitted and put to use with utmost transparency and efficiency.

Dr. Sania Nishtar quoted it while attending the inauguration of the 12th annual CSR Summit-2020 as a chairperson. The summit was held by the National Forum of Environment and Health.

While addressing the event, Dr. Nishtar further said she had been advising the philanthropist to get linked with the corporate sector of the company, wait another three months so that the special arrangement is launched. This will allow the government to receive the donated funds with utmost honesty and integrity.

According to her, a web portal is going to be launched as per the proposed arrangement in which the corporate sector will get thorough information about how each single donated penny would be spent for the well being of the individuals. Besides that, several other components of the program will also be greatly benefited by the program.

Ehsaas program is comprised of 134 different sub-programs. All these initiatives are formulated for the well being of the affluent struck and needy citizens of Pakistan included women, aged people, and orphaned children.

While addressing the same event Shafqat Muneer a researcher at Sustainable Development Policy Institute said that the philanthropic contributions submitted by the Pakistanis as a nation are very generous. As much as Rs.500 billion had been spent in Pakistan as charitable donations. According to him, the donations can multiply at a high pace if the right policies are introduced in the country that could bind the corporate sector with CSR.