This is the digital age and companies that aren’t embracing digital trends will die out soon.

Gartner, a leading technology research and analysis company, has released a new report that highlights the megatrends that help digital businesses thrive in the next decade. The report titled “The Hype Cycle for Emerging Technologies 2017” details the top nascent technologies, and using deep learning, it points out which tech will gather traction in the coming years. All information in the report was compiled after Gartner’s review of over 2000 companies that it tracks and analyzes. To help people visualize things, the report comes with an interesting graph that includes up-and-coming or relatively new technologies and maps them according to the time it will take for them to become mainstream. 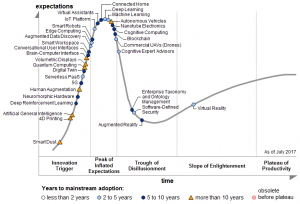 Very interestingly, the report points out that today’s popular technology ‘Blockchain’ will take 5 to 10 years to come in the main stream whereas lesser known technologies like Serverless PaaS, Augmented Data Discovery, and Edge Computing could be the hype in two to five years.

However, if you run a business or could potentially start one in the coming year, Gartner details the top three technologies that will be creating the most buzz in the next ten years, and a businessperson it’ll be good if you adopt them and stay ahead of the curve.

The report says that Artificial Intelligence will be the most disruptive technology in the coming decade. With the increasingly powerful computers, massive amounts of data being produced daily, powerful deep neural networks, organizations who are well-equipped with AI will stand a better chance at solving their problems and growing their businesses.

With companies like Facebook, Microsoft, Apple, and Samsung already working in Augmented Reality and Virtual Reality areas, you should take a hint that they are the next big thing. In a few years when AR, VR, and other Transparently Immersive technologies properly take off, companies who’d have adapted them will have a competitive advantage.

Gartner suggests that if people want to benefit from this technology theme, other than AR and CR, they should adapt 4D Printing, Computer-Brain Interface, Connected Home, Human Augmentation, Nanotube Electronics, and Volumetric Displays.

The IT infrastructure that we are so familiar with is rapidly changing. Take Blockchain, for example, which allows records and transactions to be handled in a decentralized manner. Emerging technologies are so advanced that they require a completely different set of technical infrastructure in order to be supported and thus there is a need for platforms that enable foundations in terms of volume of data needed, advanced computing power, and ubiquity-enabling ecosystems.

The future we’ve always envisioned is here and it’s time to gear up for it.

To view the complete report, you’ll need to sign up here. 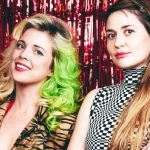